It feels like Christmas morning. The anticipation of opening the presents and finally getting to play with that new toy. There is a temptation to inform the Salt Mine bosses that Chilebrown will not be at work today because He has to cook a roast and try out his new Kramer 10 inch slicer. The Christmas Eve suspense lasted for 5 years. That is when this knife was ordered. It was worth the wait.

Bob Kramer makes a unique and high quality knife. They are sought out by professional chefs, collectors and home chefs. He is famous in the knife making world. Bob holds a title of "Master Knife Maker" which only 67 are recognized in the United States. There have been numerous magazine articles about Kramer Knives. He was even featured on TV with my friend Joey Altman's 'Bay Cafe'. Ms. Goofy and I visited Bob and his shop when he used to be located in Seattle Washington. He is a very personable Bladesmith. Bob walked us through the knife making process and answered My long list of questions. After the tour, I offered to purchase one of his knifes. Bob informed me that I would have to be put in to the 'rotation'. That first knife took about 6 months to rotate my way. This took place around 1997 and now 12 years and half a dozen knifes later the rotation is about 5 years.
This knife is a 10 inch slicer. It is used for carving roasts and large cuts of meat. It is made from a tool steel called '52100'. The steel goes through a seven step heat process which takes 6 hours. It then is given an edge, sharpened and honed. The handle is Cocobolo a rosewood harvested from the equatorial zone. This knife is a thing of beauty. I think I am going to cry. 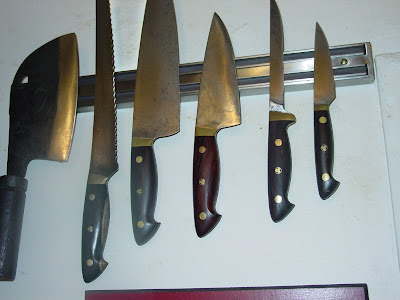 Posted by Chilebrown at 7:25 AM

Is its first name Cosmo?

You've inspired me to go sharpen my own knives - been putting that off for weeks!

I got my first Kramer in 1999, an
8" damascus chefs knive. Since them I got a 5" utility and 3.5" paring both out of carbon steel and I just received my 10" damascus chefs. They don't make the food taste better but they give me joy every time I use them. They feel and work amazingly well. Gene

Congratulations on owning those Kramer knives. Although he is no longer taking orders, I asked that my name be put down for hoped-for future when he starts making knives to order again. Meanwhile, I might just have to settle witht the mass produced Sur La Table versions. What do you think of those?

These look awesome! I wasn't sure what I should get my husband for our first anniversary, but my dad suggested these knives.. I was able to find them on Ebay and I can't wait to give them to him!
-Sylvia
Kitchen Scales

These are great looking knives. I also have a collection of knives including kitchen knives, cold steel knives and buck knives. Anyway, thanks for inspiring me to sharpen my own knives. I am going to try this activity this coming weekend.