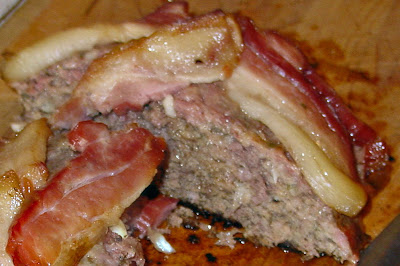 The Chilebrown Ice Cave is full of meaty delights. Tonight some elk meat and Dakota sausage will be combined to form a meat loaf. It will be blanketed by bacon from Prime Smoked Meats. This tube of splendor will be kissed by a controlled firestorm of burning mesquite embers. There is drool coming from my kisser just thinking about it. A simple meatloaf recipe is the only guideline to use. We just so happened to have a Walla-Walla onion that was grown by our neighbor. Let's start cooking.
Meatyloaf

Combine all the ingredients except bacon. Form into a loaf. Place into cast iron pan. If you have a trivet, use it. Cover the loaf with bacon. A medium hot fire should be built. A sprig of rosemary and a twig of apple wood was thrown on the coals for the smoke effect. You want the temperature to be around 350 degrees. Cook for 45 minutes or until the internal temperature reaches 150 degrees.

We served this with some baked potatoes and some fava beans. This was some serious good eats. 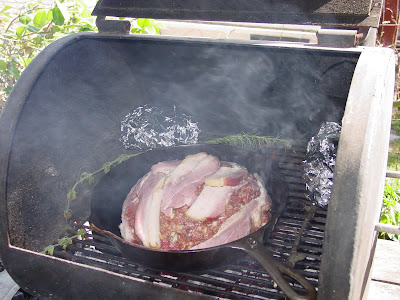 Posted by Chilebrown at 7:28 AM

Seems like a good candidate for best meatloaf ever! You continue to raise the bar on creative grilling.

Andrew, Thankyou for the nice commpliment. As you know we are just havin fun.

I wouldn't have thought of putting a meatloaf into the barbecue but I think it's a brilliant idea. The bacon is a super idea, too. Gonna try this on the next hot summer day when I want meatloaf but don't want to turn on the oven. Cool!