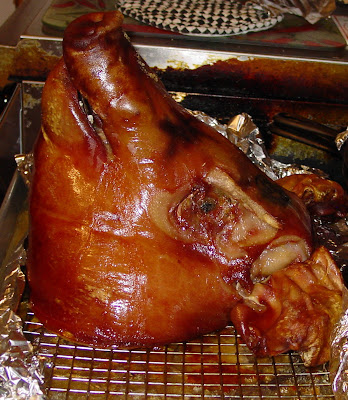 You know I had to do it. After watching Andrew Zimmern eat all his exotic foods this will be tame. I had to wait till the right opportunity to partake on my culinary experiment. Basically I had to wait till Ms. Goofy was not around. She would never put up for Porky's smiling face. She has been helping watch Jeremy's girls so I had a small window of opportunity. It was an adventure just to purchase this cabeza.
A trip of Oakland's Chinatown was unfruitful. Four meat markets were visited. Most of these stores specialized in selling pork. Most of the workers did not or want to speak English to me. I would use hand gestures, pointing at the pork and then my head. That got a couple of chuckles but no pork head. One keeper spoke English and said he would sell me a frozen head. He turned to his colleagues and spoke in a foreign dialect. He turned to me and said "No Head!", and that was it. I left Chinatown and traveled to High street. There are a lot of Mexican markets in this area. I found a pigs head here. 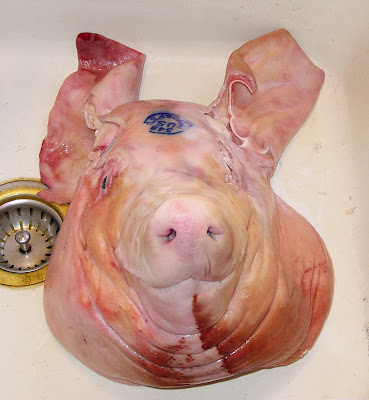 The head was rinsed and cleaned. A splash of salt and a rubbing of vegetable oil was the only garnish for this smiling skull of porcine. 400 degrees for an hour and 1/2. The temperature was dropped to 350 for another two hours. The house smelled wonderful. It smelled of a delicious pork roast. The roasted pig head was a beautiful golden brown. I immediately broke off an ear and started to munch. It was chewy and very tasty.
The cheek meat was so very tasty. It had a very flavorful rich pork taste. It was not bland at all like a tenderloin. Taco's were the vehicle of choice for cheek consumption. A little salsa made this a treat. I did try a little nibble of the brain. It was not unpleasant but it was a texture and flavor that I was not used to. No it did not taste like chicken.The tongue did have a beefy flavor. Now for the dish everybody has been waiting for, 'Eyeball Taco's". This took a little adult beverage encouragement. I marinated myself and took the challenge. I took a bite and it did pop in my mouth. Not a lot of taste.
This was one for the books. You only live once and eyeball taco's are a must do. I need to get rid of all the evidence before Ms. Goofy gets home. 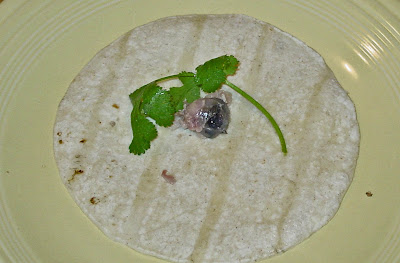 Posted by Chilebrown at 7:23 AM

Can you hear me screaming? Your sense of adventure is off the charts!

That looks great! I'm not sure how down I'd be with an eyeball taco, but I would happily plow into those crispy cheeks.

Next time Ms. Goofy is out of town you can try making head cheese!

I had pork brains with my grandfather in NC as a kid and they reminded me of scrambled eggs. Then again, I was eating them with scrambled eggs and white vinegar so that might have something to do with the comparison. They were pan fried though and I imagine a big difference from the smoked ones your head had.

Great post. I am sure this is the only roasted pig head post I'll read all year:)

I'm with Zoomie on this.

No, really, I thought you were kidding! It's so beautiful.
You could have invited me over. I'd have eaten the other eye.

wow, that looks amazing, the skin tastes so good and yes the cheeks are so moist you can spread it on bread like butter.

Wow, count me impressed (and hungry, that looks delicious). Tha's some serious nose (or eyeball) to tail eating.

You're at the top of your game man! What could possibly follow? Oh yeah, bacon!

This has to be the pinnacle of extreme BBQ! I would try everything up to the 'ol eyeball. Now that you have a source, perhaps an annual event?

Just bought a head today!
Will cook it up tomorrow.

They just started carrying pig heads at my favorite chinese market and I am having one this weekend.MMM MMM MMM crispy pig face!

for some reason I just dreamed I'd be roasting a pigs head, now I have to do it! What mex market did you find it at? I'm in W-Creek, and will try around here first, but Oak ain't too far.

that eyeball I'd pass on though, does it have any taste?

That's awesome! I just got home from our local Super Walmart, but to my surprise, they had a whole freezer case full of shrink wrapped pig's heads. I am so definitely going back to buy one. I'd have the same problem with the Mrs. except she works a lot of late evening, so it's just me and our five year old son who'll be free to indulge in this culinary adventure.

We just slated 5 hogs, all dressing out at about 200#. So we were wondering what to do with the heads (the previous 4 we made porchita decasa) so this time we just marinated them in a bucket with salt, brown sugar and cinnamon just like we do when making our hams. Brine them for a week then smocked them just like a ham. OMG why haven't I been doing this the last 15 yrs of raising hog. Head hams are amazing

I'm a little late to this conversation but damn did it make me laugh! I'm the wife that needs to do this when my husband is out of the house. Then I need to find someone to help me eat it! I've finally found somewhere that I can get one and thanks for all the great suggestions in the cooking. Wish me luck!