A BBQ PILGRIMAGE TO AUSTIN, TEXAS 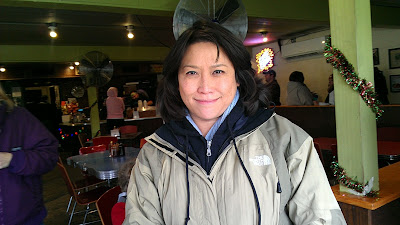 Welcome to a journey to Austin Texas to sample the best BBQ of this region. Donna Fong a Professional BBQ Competitor recently traveled to the Austin area to just eat barbeque. Now that is my kind of vacation. Donna has graciously shared her journey with Mad Meat Genius readers. Sit back, enjoy and prepare to be hungry. Over the next several days we will run her fabulous story.

These spectacular images were taken by Harry Soo. Harry is a 'World Famous Pittmaster'. He has the rest of the story at 'Slap Yo' Daddy BBQ.. Com.  Here is the link

Why does one vacation? The way I see it, you go on vacation to take a break to relax and enjoy life, to do something that you’ve always wanted to experience or to reconnect with someone. Or if you can combine all into one vacation, well, that’s a great time. For my Christmas break, I went on an experience vacation but ended up relaxed, met some old friends and even made a few new ones along the way. 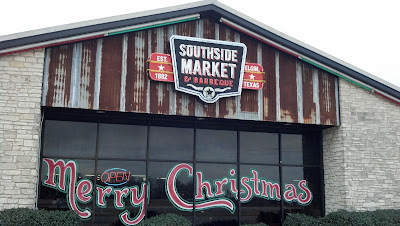 The destination was Austin, Texas. Mind you, I’m a proud California native and if there is one state that seems diametrically opposed to tofu loving Californians, it would seem to be Texas. But everyone knows there’s great BBQ in Texas, maybe even the best BBQ in America. And it didn’t seem right to cook brisket for two years running and never taste it in the place that started it all. So off to Texas we went. I chose Austin in particular because of Franklin BBQ, recently heralded by many as the best BBQ in America. Franklin is re-known for its brisket, my favorite BBQ of all. 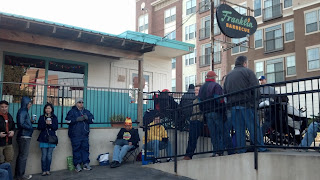 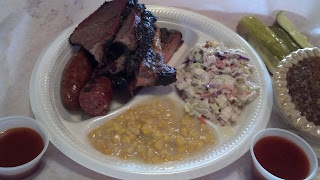 For me, half the fun of a vacation is planning. To
some, this may take all of the surprise out of an adventure. I disagree. Planning is like dreaming. By doing homework, you learn more about the destination than you can experience in a short period of time. What you see will be what you think is the very best the city has to offer. So I researched the top BBQ joints, including the most time honored restaurants. I wrote down addresses, hours of operation, the notable items on the menu, watched videos of Texas BBQ, and charted which joints to visit on which days. With me, I brought an empty laboratory notebook full of information and space to write down restaurant layouts, names of people, photos, menus, business cards, and KCBS scoring for everything I ate. Each establishment had its own tab in my geeky black notebook which I carried with me everywhere. Having been a BBQ judge for some time now, I was a veteran at pace eating. Five restaurants a day would be a goal. Anything above that would declare me a devoted foodie, worthy of a pin in my mind. At the time, I didn’t know what I’d do with the leftovers but I’d eventually figure it out. 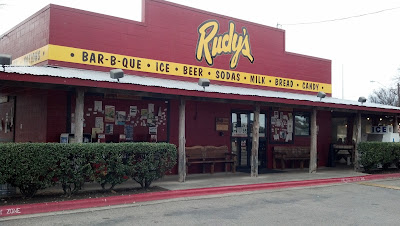 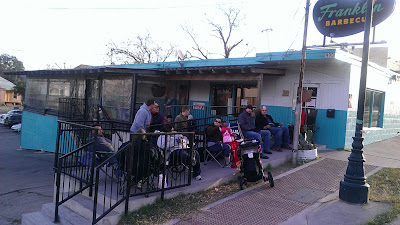 Austin is an easy 3.5hr flight from Oakland. The airport reflects two defining characteristics of Austin, its art and its music. I haven’t heard a live band since my last BBQ competition but on the second floor above the baggage claim was a young band welcoming visitors and natives. There was a band in the Nashville airport a couple months back but this music was decidedly not country and didn’t have a twang. Throughout the airport, and throughout the city, for that matter, was art. Sometimes it would be a random piece in the middle of nowhere but sometimes it was an intentional array of flair. Austin art doesn’t mean to be pleasant or refined, which I often distrust, at least outside of Europe. The art here is rough, challenging, modern and thought provoking. It was just up my alley. All of my homework didn’t prepare me for a city open for reflection or social comment. In another 24 hours, I would soon realize that Austin was very similar to the East Bay minus the swarms of Prii (plural form of Prius). Our well planned trip was still full of surprises. 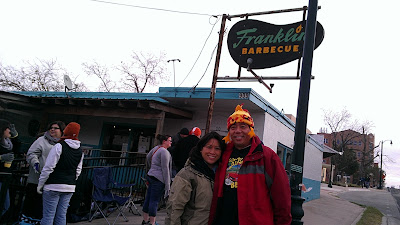 So what makes Texas BBQ different? First of all, there’s this business about butcher paper. I had heard about the butcher paper in Austin but never saw anyone use it before. Not in BBQ anyway. My dad uses butcher paper, of course, at his shop. We use to draw on it as kids after school, in the narrow little office towards the back of the shop in Oakland. But this wasn’t the same paper. First of all, it was pink. They call it pink butcher paper but actually it is more like rosy brown. Short of the big chains, most of the BBQ joints serve your meat on butcher paper. You get a choice of white bread or saltine crackers. Almost everyone will give you sliced onions and dill pickles, sliced or spears. If the restaurant wants to be generous, they will offer you the spear pickles. It’s a fancy thing I guess. Sauce is almost always a bottle on the table, not a liquid on your meat. Almost nobody cares about going over the top with sides. With the exception of Stubbs, all the sides were all pretty basic. 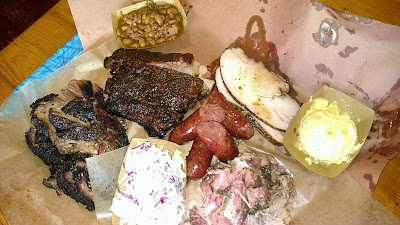 There were often two lines. One line was for meat, after which you’d proceed directly to the sides/drinks line. Sometimes you pay for meat separately, sometimes together. Oftentimes, you can watch the pitmaster pull the meat from the warming oven, which some may mistake for the smoker. Smokers are often in the back, away from the patrons. Most places burn post oak and few use a gas driven smoker. 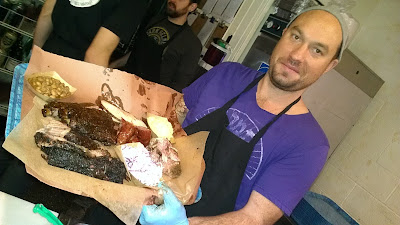 A big difference from what I’m used to in California is that meat is sold by weight. It can also be sold as a 2 meat or 3 meat combination with sides, but the old school places will sell you brisket, ribs and sausage by the pound. A cold ring is an uncooked ring of sausage. A hot ring is a cooked ring of sausage. The smaller places run out of food before dinner, others serve lunch only. Others only open one or a couple days a week. Some wouldn’t open until 4 PM but stayed open until 4 AM. 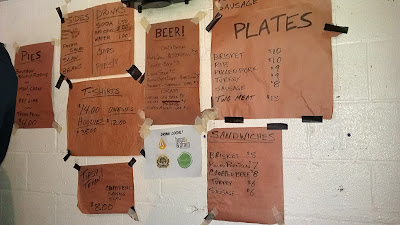 Much of this is because of the large number of food trucks in Austin. The trucks run at all hours and there are hundreds of them throughout the city. I thought Portland was the food truck capital of the world but after having visited Austin, I think they’ve got Portland beat. The streets are littered with food trucks of all types. They serve anything from Tex-Mex tacos, chicken cones, banana and brown sugar doughnuts, chicken tikka masala, NY style pizza, fried chicken, to grilled pig tails; and, of course, BBQ. 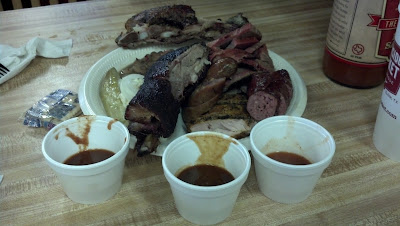 With the University of Texas in the center of the town, the city of Austin has a young vibrant feel to it. The Austin City Music festival, which lasts for two weeks in October, always attracts a large crowd. The South by Southwest (SXSW) festival blends music and film together for one week in February. The Urban Music Festival is held in March. The list is endless. The food trucks thrive when the festivals are happening. We frequently heard owners of BBQ joints talk about the Austin festivals and the waves of crowds that would spread throughout the city.

We began our journey with much gastronomic anticipation. 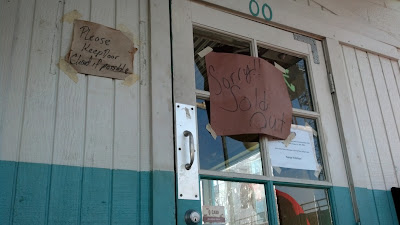 Posted by Chilebrown at 9:01 AM

I can't wait to see the rest!

Miss Donna writes and photographs hella good! Thanks C.B. Show her the way blog master, she is ready for her own blog.

Three Dog BBQ, The next three installments will come every other day. Stay tuned.

Greg, Donna is a very talented writer. She wears many hats. She does contribute articles to our monthly BBQ magazine.

Thanks everyone. Harry Soo took most of the photos and indeed, he is a good photographer for sure.

Very impressive write up, loved reading it and can't wait to get to the next installments.