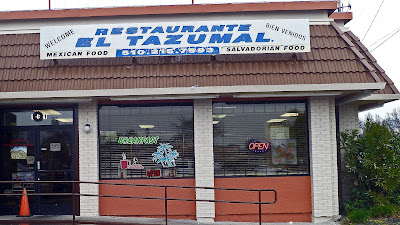 Chileverde with a Salvadorian twist is on the menu today. We venture to San Pablo, California to El Tazumal. The sign outside advertises Salvadorian and Mexican food. We are on our never ending quest to find the ultimate plate of Chileverde.  We hope that El Tazumal fills the bill. It is the noon hour and the parking lot is full. This is a good sign at our new dinning destination.. We walk through the door to a full house. The television is loudly broadcasting a soccer match watched by men in work clothes.. I survey the room and notice that most diners are having soup or papusas. This should be fun. 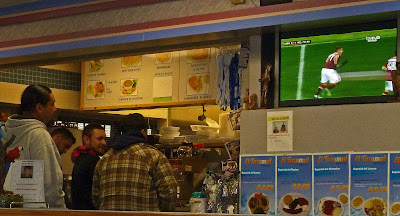 The menu is large with colorful pictures depicting various dishes. It is not your typical Mexican faire. I survey the section on ‘Carne’ offerings and only see a chileverde burrito. There is only one waiter working the floor so we watch the soccer match hoping a team scores a goal to hear the animated announcer shout: “Goooaaaalll”. It is now our turn to order. Our waiter patiently explains several unfamiliar dishes to us. He says it is no problem to have a plate of chileverde. He asks if I want Mexican or Salvadorian style tortillas. The latter tortillas are thicker.  Salvadorian tortillas and a meat and cheese papusa would accompany my chileverde plate. 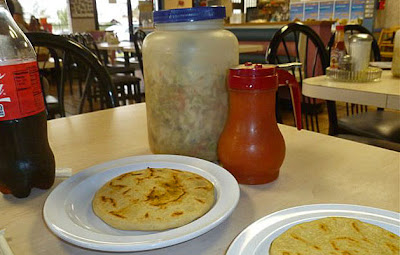 The waiter returned with our drinks, chips and salsa. The salsa was a thin tomato base vinegar sauce with not a lot of heat. Each table had a plastic jug that was filled with a cabbage mixture that was salty, slightly fermented type of coleslaw/sauerkraut. I looked at the other tables and noticed that everybody used this to accompany their papusas. Our dishes arrived promptly. 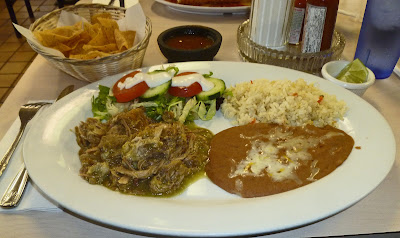 The waiter arrived with two huge platters of food. The chileverde meat was shredded not cubed as I am familiar with. It looked scrumptious so I did not hesitate to eat. The meat was on the salty side. The texture teetered on the side of overcooked. The green sauce/gravy that accompanied this pork did not have a pronounced pepper flavor. In spite of this criticism I devoured this meaty offering. The papusas and tortillas were freshly made. This was masa nirvana. This is comfort food that is filling and satisfying. I could see why customers were having lunch of only papusas. The cabbage mixture, a little to salty for my taste, was a good accompaniment. Ms. Goofy loved her burrito. 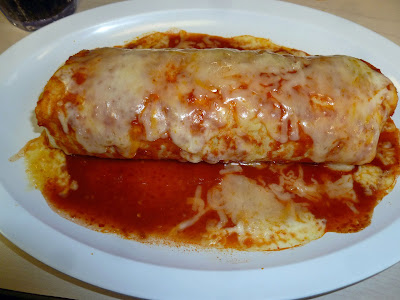 El Tazumal is a very decent lunch destination. Papusas and Salvadorian tortillas are a must have item. The prices are more than reasonable for a huge platter of food. Our quest for the ultimate Chileverde will continue but we shall return to El Tazumal.

Looks really good! I love pupusas. I worked at an office complex and one of cleaning crew had a side business making them. She charged $1 each and they came with curtido (slaw.)I wish I could eat one now.Thanks for a great review as always.

That burrito looks fantastic! I haven't had a shredded chile verde.

Greg, Give me a call sometime and we will go have Papusas at El Tazumal. You cannot beat them when they are fresh off the grill.

Chris, It was a little different. I prefer cubed meat. The lightbulb does go off for next time I do pulled pork.

I do not understand the "thin" salsa that some places provide with your chips. Sometimes it tastes good, sometimes it tastes average, but I like some substance in my salsa. Everything looks good. I there truly "bad" Mexican food? Even average food is good...

Three Dogs BBQ, What is a good salsa? is a very complex and interesting question. Personal, regional, ingredients, seasonal there are so many variables. I love a pico de gallo made with fresh ingredients but I also love a dried chile sauce. It sure is fun trying them all.

My favorite is much like yours Chilebrown. Simple, fresh ingredients from the garden: tomato, onion, jalapeno, and parsley (sorry, I don't care for a lot of cilantro), a boat load of garlic. Lightly salted with olive oil, cumin, an fresh squeezed lime. Nothing better. I can't wait on fresh tomato season. I am getting tired of the tasteless wintertime tomatoes...