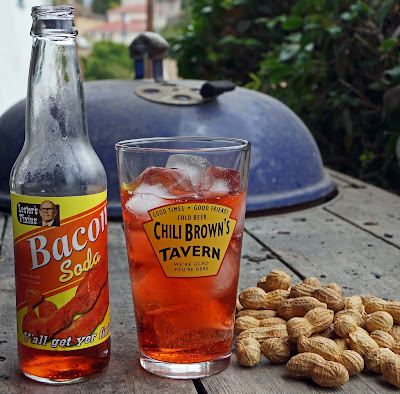 Why do we continue to torture ourselves? The fascination of any bacon related products has us hooked. Is it because of how much we love the taste, the feeling of eating good bacon. Bacon soda is not new and we have tried it before. In fact I would not wish 'Jones Bacon Soda' on my worst enemies. We want to believe, so here we go again. These are two bacon flavored sodas from "Lester's Fixins"; 'Bacon Soda and Chocolate Covered Bacon Soda". 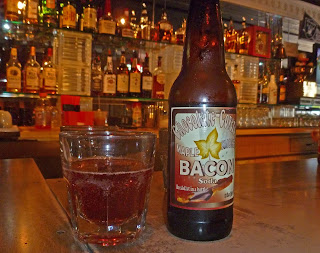 The Bacon Soda was first. It has a pinkish, peachy hue. The aroma is neutral and does not sing out the promise of bacon to come. We poured it over ice and braced ourselves for the worst/best. This soda was lightly carbonated. It was not overly sweet like the 'Jones Bacon Soda". Here is the million dollar question. Does it taste like bacon? Ms. Goofy claims there was a mouth feel of fat, possibly bacon fat. I did not taste bacon. We did not find this soda terrible but would not invite it to any party that we would throw. We examined the label and did not find bacon as an ingredient. There was  'natural flavorings' listed on the label.
We went to our local watering hole to share the 'Chocolate Covered Bacon Soda'. This soda had a strong aroma of Hershey's Chocolate Syrup. It was very sweet and light on the carbonation. Bacon flavor was non-existent.  It was undrinkable to all who dared to try it. Once again we were duped by bacon soda. It is a good thing there was plenty of bourbon to cleanse our palate.
Posted by Chilebrown at 7:51 AM

Yow! What a disaster. You'll just have to try making your own.
:)

I would think if you could mix bacon with Cherokee Red, you would have something...

cookiecrumb, I think I have given up on bacon soda. I gave up regular soda a while back. I will be happy with BLT's.

Three Dogs BBQ, I had to look up Cherokee Red. Cherokee Red did not make it to the West Coast in my times. Now I would like to try it.

Some things are not meant to be :)