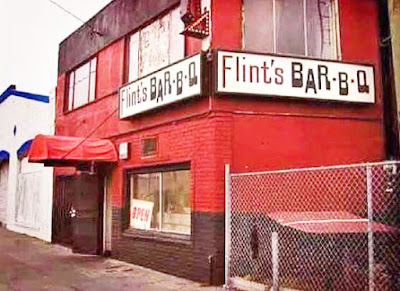 A blast from the past for anybody that enjoyed bbq back in the day was the iconic East Bay late night stop called Flint’s BBQ.  While growing up and as a young adult Flint’s BBQ was the only bbq that we knew. Flint’s had a flavor and atmosphere that forever will be remembered. There were several locations in Oakland and we would frequent the Shattuck ave branch.  It is the late 70’s, late at night, we probably imbibed with excess multiple stimulants and we were hungry. Flint’s would be open till very late. We would stumble in and get in line with a colorful group of locals, cops, pimps and a few long hair hippie freaks. All were welcome at Flint’s. You would order a sandwich. You would pick your bbq meat and it would be piled high on a slice of white bread on a paper plate with a perfectly round scoop of potato salad to the side.. A huge ladle of bbq sauce would be poured over the meat. White bread would be placed on top and all put in a brown paper bag. We were familiar with this routine so we knew to put this bag on the floor or trunk of the car because sauce and grease would leak all over the place. 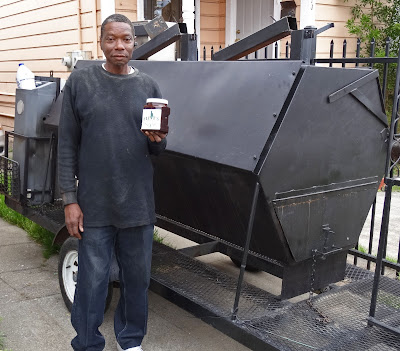 Flints has long closed down but the memory of their unique bbq sauce still lingers in the flavor memory banks. Cornelius N. Flintroy started working at his families bbq restaurant at the tender young age of fifteen. He now is trying to revive, bottle and sell his families special bbq sauce. I met him recently finding him on social media. He graciously invited me to his house. Cornelius is a soft spoken man who has the gravely voice of a seasoned blues singer. It was fun reminiscing about the old days. He currently is making the sauce in his kitchen and hopes to expand to a commercial setting. We parted ways and I left with a couple of sauces and a smile on my face. 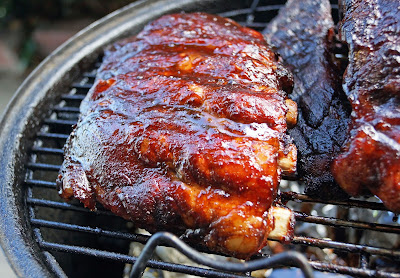 Flints bbq sauce is a unique bbq sauce that triggers memories for me. It is very dark red, almost black in color. It is smooth and fluid that pours easily from the bottle. The tastes are deep and rich with coffee and molasses. It is not sweet but has a little sour tang from the vinegar. We cooked some ribs and used this sauce at the very end of the cook. The rib rack was brushed liberally with sauce and returned to the smoker just long enough for the sauce to set. This sauce works. Ms. Goofy really enjoyed it. My tastes have changed over the years but this flavor is one that always will be great in my book. We wish Cornelius  success in returning his families sauce and tradition back to bbq aficionados. 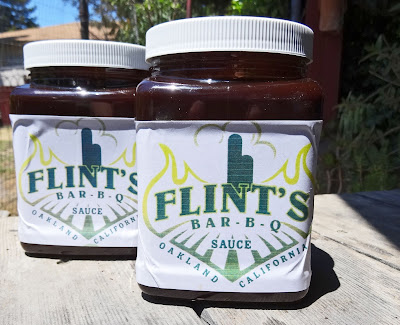 The image of Flint's was used by permission of Cornelius N Flintroy. You can contact him about his sauce on Facebook.
Posted by Chilebrown at 6:02 AM

That, my friend, is a major score.

Good story and hope the man is successful.

Aaron, Did you ever get a chance to go to Flint's? Flint's most likely planted the bbq seed in a future Master Judge.

Very nice. Homemade sauces made with love are the best. Sounds like I would like this sauce. Not too sweet and a bit of a vinegar bite. Commercial sauces can be too sweet in my opinion.

On another topic, I see that Aaron Franklin opened up shop in the Bay Area. Will you be standing in line to give a little review in the future?

Three Dogs BBQ, Aaron Franklin came through town and opened a pop-up restaurant. The tickets were 140 dollars a piece. He has come and gone. I did not go for numerous reasons. I would like to go to Austin someday before he gets shutdown by the Spare-the -Air Nazis.

I like the idea of it, a little old school.

Holy Shit, Mr. Flintroy is still with us! I worked for the City Cab Company which was located above the 31st and San Pablo FLINT'S and ate my "breakfast" there every evening when I worked a 7 p.m. to 7 a.m. shift.
Mr. Flintroy once noticed my friend Art's black and tan hound, Pedro, waiting in the truck out front. He then proceeded to give us about 5# of brisket 'trimmings' and fat for the dog. Never tasted better sauce.

I grew up in Oakland. Flint's was simply the best ever. The. Best. Ever.

Flints did have the very best sauce. I was on touch with one of his daughters a couple of years ago. She said they had no intention of selling the sauce unfortunately. Evidently things have changed.

I have never found BBQ as good as Flint's again. I was a regular at the Shattuck Ave. one. We used to call MNF Monday Night Rib-ball because it usually included some Flint's. Sunday Niner games, as well. The sauce was what I look for but never find...sweet, thick and with the proper heat.

I had the privilege and honor of working there in my late teens early twenties and I just remember going in the back and peeling potatoes that have been boiled and just getting my sliced beef sandwich with hot sauce and links . It was just too hey out for a little while not even worried about being paid, it was just that kind of environment .... if not shattuck where the ceiling was low, or by 73rd... one of the 3 spots guaranteed to be open. Good times, good memories.