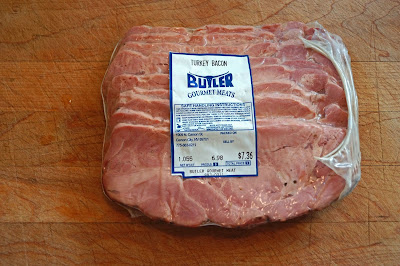 Turkey Bacon? This is not the first time we have tried a similar product. This turkey bacon comes from Butler Meats located in Carson City Nevada. Merriam Webster defines bacon as; "a side of a pig cured and smoked". We are trying this so called 'bacon' with an open mind.
This cured meat was very lean and needed a little oil to prevent sticking in our black iron pan. It never really crisped like traditional bacon. It did brown up nicely. The bacon had a flavor of ham. It was salty with a slight hint of smoke. There was a little sweetness to make a good balance of flavors. Overall it was pretty tasty. Would I call this bacon? No, but a label of processed turkey parts might not sell as well. 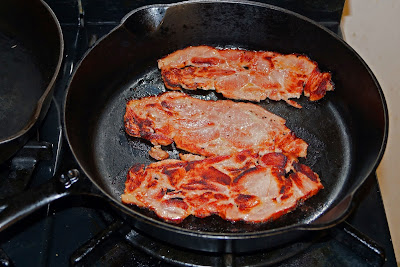 Posted by Chilebrown at 7:04 AM

I'm like you - bacon has a definition and nowhere is turkey mentioned. I think I'll stick with the real deal and leave the turkey for Thanksgiving :-)

Big Dude, Turkey bacon is not bad. I think it should be labeled as a turkey cold cut. It actually is decent for a sandwich. It is not bacon.