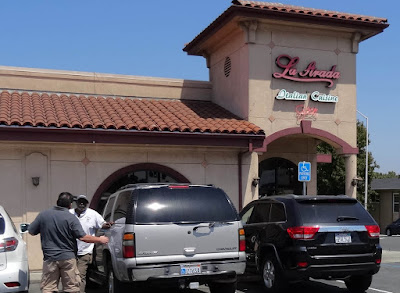 Contrary to popular belief I eat other foods despite award winning barbeque. In fact I love Italian food especially raviolis. I am a card carrying member of the Richmond Galileo Club an Italian social club even though I am not Italian. Today we had lunch at La Strada Italian Cuisine. I received a very high recommendation from an old Italian friend; "Whitey" This is a direct quote from my friend "Whitey"; "Every Dago in West County goes to La Strada" If it is good enough for Whitey it is good enough for me. 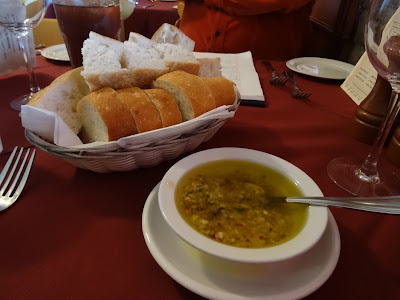 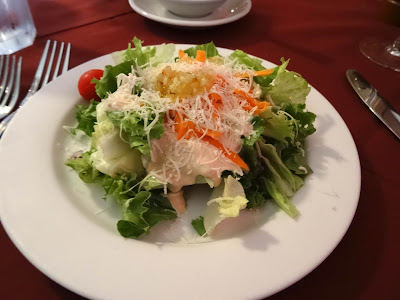 When we sat down we were treated to the most decadent freshly baked french bread. I say decadent because it was served with a bowl of olive oil , garlic and herbs. That is not all, three different types of vinegar were brought to add to this fragrant mix. Dipping the bread into this mouth tingling elixir could of been a meal in itself. Vampires look out.  I started off with a house salad that was refreshing and vibrant. 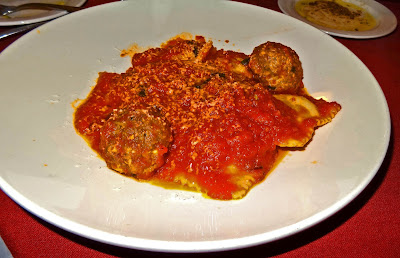 The raviolis were house made and had a meat filling. It was served with your choice of sauce which today was marinara. I also ordered a couple of meatballs which were for an extra charge. The sauce was rich with tomato goodness. The raviolis were cooked on the al-dente side and had a bite to the tooth. The filling was meaty as described. This combination of pasta, filling and sauce was a hearty comforting mix of Italian love. The meatballs seemed to have been re-heated and a little hard to cut through. The meatballs will be left off the next order. Our dining companion Ron said we had to order the spumoni. 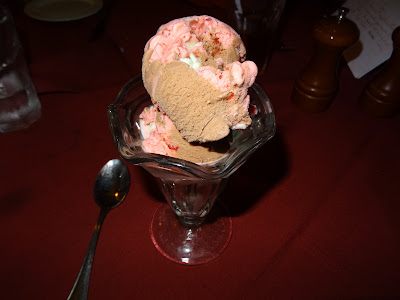 Spumoni was just the perfect ending to this lunch of Italian faire. Pistachio, chocolate and strawberry ice cream with candied fruit was yummy good. We plan to return to La Strada to try some other menu items. Whitey was right about this being a good Italian restaurant.  Tomorrow night I will be at the Galileo Clubs Men's dinner and raviolis are on the menu too. When the moon hits the sky.

Italian is my favorite ethnic food and I grew up eating it cooked by our friends grandmothers who spoke little English - hard to beat the real deal and there is only one restaurant in the Knoxville area where I will eat Italian. Yours looks very good from here and I love that kind of bread dip.

Greg, To quote General MacArthur; "I came through and I shall return".