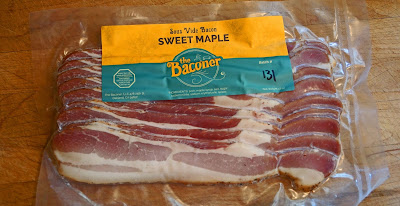 What? I guess the question should be; Why not? “The Baconer’ is a company based out of Oakland California. I believe it is a fairly new business and sells at a few farmers markets and online. We found this bacon at the Kensington farmers market. What caught my attention was a big sign proclaiming Sous Vide Bacon. I had to investigate. I asked the friendly vender about this product and she did not know too much about the process. They were distributing some microscopic samples which I tried but was not the reason for my purchase. I plunked down 15 dollars for a 12 ounce package of sliced rashers because I was curious as all get go. 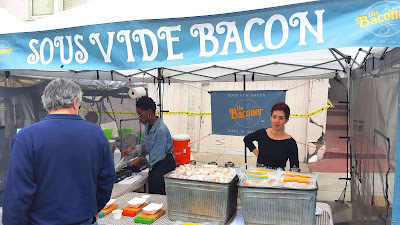 I reached out to the Baconer Company and talked to Camilo Velasquez who is the “Self-Appointed President for Life”. He graciously answered my questions in a vague sort of way. The pork is sourced from various farms and of various breeds. Duroc pig was one of the breeds mentioned. The bacon is cured in secret spices to achieve different flavors. It is hot smoked and here it is where it gets interesting. Commercially processed bacon has to be brought to an internal temperature of 145 degrees to be safe and ready to sell. The Baconer achieves this temperature by a Sous Vide machine. Mr. Velasquez tells me this process of Sous Vide retains moisture and flavor. I believe a taste test is in order. 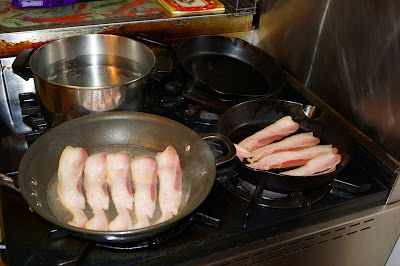 Another interesting suggestion The Baconer recommends is to start your bacon in a frying pan with 1/8 inch of water to surround the bacon. Use a medium high heat and simmer off the water and crisp. This is for several reasons. It will protect the meat and cause it not to have heat shock and over render. (The Baconer’s claim). It also acts as a sort of braise. We will follow these directions 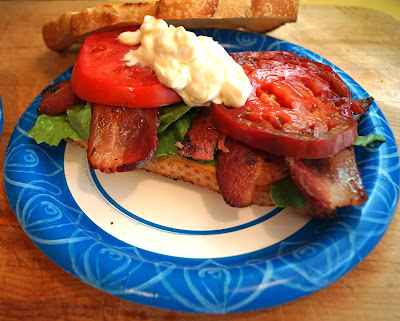 We cooked several slices in our trusty black iron to compare the techniques. The cast iron cooked a little faster and ended up being crisper. The braising with the water seemed to keep the bacon possibly a little plumper with less shrinkage. The unfortunate consequence was this method produced chewy bacon. They both tasted the same. We used our bacon in BLT sandwiches using some farmer’s market fresh tomatoes.

The Baconer’s bacon had a great pork flavor. It had a nice amount of smoke. The meat to fat ration was very good. We purchased the maple flavored bacon. We did not detect any maple flavor. It has a sweet component and there was a lot of sugar in these slices. I had to turn down the heat to not burn the bacon because of the high sugar content. This was very decent bacon but does it justify the high price tag? We know this bacon was finished in a Sous Vide machine because we were told this fact. Does it stand above the crowd with superior flavor and moisture? Not really but it is a very decent bacon.