We are visiting “Augie’s Montreal Deli during their inaugural opening week. The specialties are smoked brisket, turkey and poutine. Below is some information about Augies from the webstie.. They are located in a former industrial area of West Berkeley California. I only mention this because it is not a place you would casually drive by. Parking Karma worked today because we parked right in front. (See Note below). We walked through the door to a packed house with ice hockey on the television. A menu was on the wall with a counter to order at. The line moved fairly quick and we were cheerfully greeted by the owner Lex. 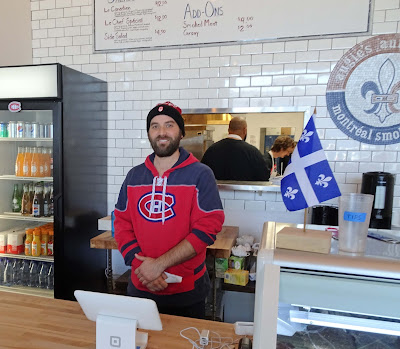 “Augie’s Montreal Deli is a Canadian family deli specializing in Montreal Smoked Meat (beef) and Montreal Smoked turkey sandwiches, Quebecois poutine (french fries smothered in cheese curds and St. Hubert gravy), home-made Polish dill pickles, and other Canadian comfort food favorites.Montreal smoke (or smoked) meat is a cured beef brisket with the spice of pastrami and the crumbly texture of corned beef. We naturally cure each brisket, hand rub with our traditional spice blend, then smoke them with hard woods and bake for 8 hours. We serve authentic poutine using St Hubert poutine sauce imported from Canada, and real deal squeaky cheese curds from Oakdale California. It’s the way that the good people of La Belle Province (a.k.a. Quebec) intended poutine to be.” (horked from Augies website) 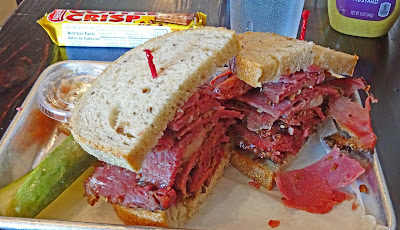 We were there to try the smoked meat. They did offer smoked turkey but we opted for the Montreal beef brisket. Lex told me it is cured and smoked at a co-packer in Redding Ca. with his special recipe. It is steamed and sliced at Augies for meals. We also ordered an order of poutine. This was a first for Ms. Goofy. It does have all her favorite ingredients of cheese, fry’s and gravy. This version had some of the smoked meat added too. We were also told on the cuff that the gravy was from Canada as a comfort element. You know it is “All about the gravy Mang”. 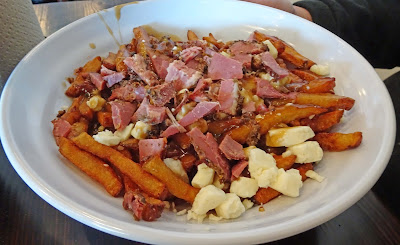 Even though the house was packed we were served right away. The sandwich was large and looked fantastic. I pulled it slightly apart to sample the meat. It was tender and would pass any barbeque judge pull test. The flavor had a pastrami type spices and flavor with just a hint of smoke. The beef flavor was mild and what I liked was it was not overly salty as some cured meats can be. I put my sandwich back together with an added a dollop of spicy mustard. Oh yes, this was a sandwich to sink your teeth into. It was served with a very sour house cured pickle that complimented the rich cured beef. I ate the whole thing and then scooted over to help Ms. Goofy with her poutine.
The poutine was comfort food to the maximum. The gravy was salty and rich which covered extra crispy fries. The cheese curds do not have a lot of flavor but add a texture element and more fill to this very filling dish. The added bonus was little slices of the Montreal beef. Ms. Goofy loved it as I did. I will admit the gravy put it over the top yummy. 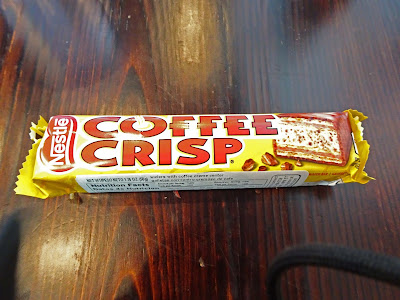 I still had room for a slice of cheesecake. Oh I almost forgot the Canadian chocolate bars they have for sale. My mother originally was from Canada and we would visit relatives up north. As a child, I remembered the Coffee Crisp candy bars more than the relatives. You cannot buy these candy bars here in the states at least on the West Coast. This touch added many bonus points to our meal. This concluded our inaugural visit of Augies and we were full and happy.  We shall return. Leave your money at home because they only accept plastic which is definitely a new one for me. 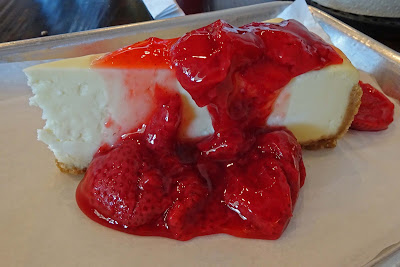 Note:  There are a dozen spots located right in front of Augies and lots of other parking nearby. The only problem is all this parking is  signed for the various other retail businesses’ with posted warning signs that if you park in this spot and you are not a customer you will be towed. I am not sure how strict they are in enforcement and I care not to find out. I did notice they were removing a couple of these signs as we were leaving so this may not be a problem.

Posted by Chilebrown at 3:26 PM

Looks like a great meal and sure I'd enjoy it.

Big Dude, I love a dish that is smothered in gravy. The poutine sure was filling.