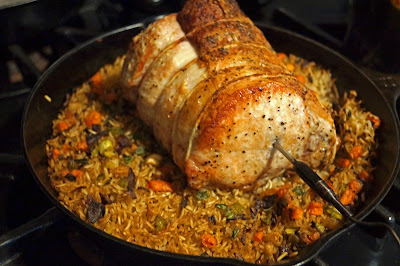 A little known secret of the U.C. Davis college is their Meat Sciences Lab meat market. The Department of Animal Services runs a functioning meat market that is open Thursday and Friday afternoons. This allows the public to purchase some of the best meat around for reasonable prices.The students raise different breeds of animals and process them all in the name of academia. We made a stop and purchased a really nice pork loin roast. Grab a fork and let's cook dinner. 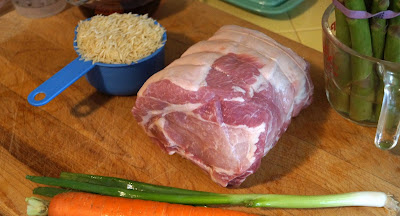 This was a small 2.5 pound wrapped and tied pork loin roast. It was seasoned and browned in a skillet over high heat. We then took some raw rice, vegetables, chicken stock and formed a bed in a skillet to cradle the browned roast for a braising in a 350 degree oven. In about an hour the internal temperature of the roast reached 145 degrees. It was removed and allowed to rest for 10 minutes. The string was removed and the roast carved. It smelled fantastic. 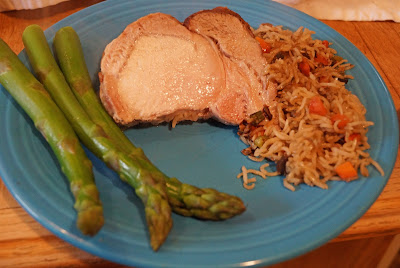 I am a little hesitant to tell you about the U.C. Davis Meat Labs because it is such a fantastic place to buy meat. This pork had real old fashioned pork flavor. It was not your bland Wally World cut of pork. The roast was so tender and moist. The rice that had received the pork drippings was an added bonus in this satisfying meal. You can actually place an order at the U.C. Davis Meat Labs if you want to buy a larger amount. We are taking advantage of this and will be returning this Thursday. Stay tuned.
Posted by Chilebrown at 7:02 AM

What a great deal for the students and the community - gotta be cutting edge meats.

Big Dude, U.C. Davis is an hour away from the abode. I am always glad when I go.