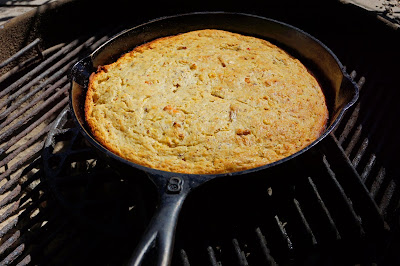 The Great White Hunter made a brief appearance coming out of hibernation to go on a Meat Adventure.We have our usual meat haunts to stalk up our ice chests There is a farm stand near Angleo's Meats and I asked the GWH to pull over to take a look. It was a nice stand which grew all its produce right on the property. What caught my eye was an old fashioned grain grinder. The sign said "Grind Your Own Polenta Corn". They also had red corn kernels to be ground. I was hooked. 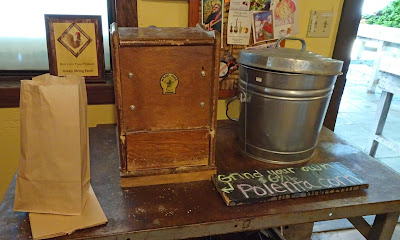 I had to ask instructions against my manlyman code and it was very simple to use. You turn it on, feed the hopper and remove ground grain from lower drawer. I also asked the clerk the type/variety of the red corn. Her answer of 'Red Corn'  was a little disappointing because there are hundreds of varieties of corn. The flour that emerged from the grinder was a course red corn flour that immediately made me think of corn bread. The sign said Polenta but cornbread is more in my wheelhouse. This will work. 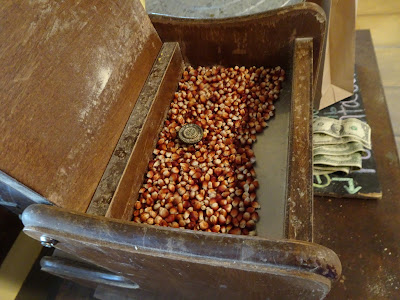 I used one cup of the red corn flour and mixed it with the all-purpose flour. This will make the cornbread a little lighter. I also cooked the cornbread on a kettle covered grill because it has been hot around these parts. This was a standard corn bread recipe but I added bacon and fresh corn too. You know I had to add the bacon. It turned out fantastic. The red corn flour did not have a pronounced corn flavor but it did have a nice added texture. It had a nuanced corn flavored reinforced with the fresh corn to make a wonderful bread.
It was nice to hang out with the Great White Hunter. He has gone back into hibernation. It was fun to grind my own corn flour.
Posted by Chilebrown at 6:56 AM

Can you be more specific on the location? I've never seen this spot (or we drove by oblivious).

Ah! We've been there for produce but never saw the corn or grinder.