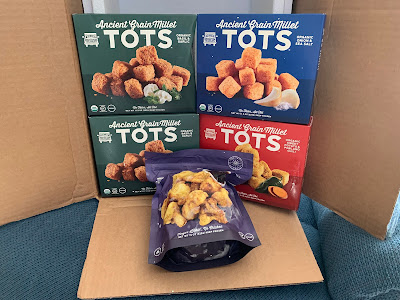 I won a contest. I won a 25 dollar gift certificate to a local grocer and a box of frozen wings and tator tots. At least I thought they were tator tots and wings. I was so excited to be a winner I did not even read the ingredient list. I did read the cooking instructions. They were simple enough and was basically heating and browning in a hot oven. Let's give them a try. 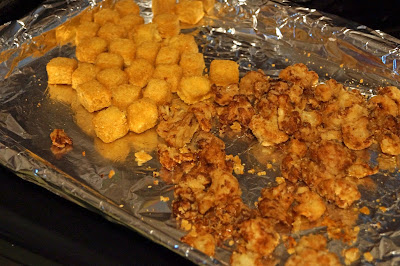 I bit into a wing and immediately thought this tastes like cauliflower. I dug out the box and read the fine print."Finger Lickin, No Chicken, Cauliflower Wings. I felt a little embarrassed and did not eat any more. The tater tots tasted fine to me but Ms. Goofy said they tasted horrid. I went back to the container and sure enough I had been duped again. Is there a moral to this story? I will think of one but first I have 25 contest dollars to spend.

OUR TOTS FEATURE THE PSEUDO GRAIN MILLET. THIS SUPERFOOD IS ONE OF THE LEAST ALLERGENIC AND MOST EASILY DIGESTIBLE GRAINS OUT THERE. IT’S ALSO GLUTEN FREE AND PACKED WITH VITAMINS AND MINERALS.