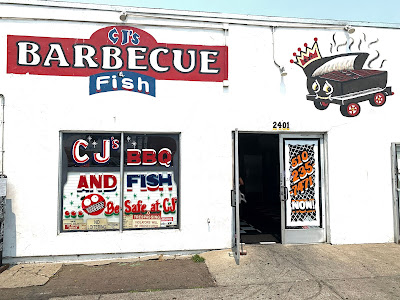 We are in Richmond California to visit a local bbq establishment; CJ's Barbecue & Fish. CJ's is located 2 blocks away from my farmers market. I have worked at the Farmers Market for over 8 years and have never visited. Recently a gala event was held to celebrate the 75th birthday of owner Charles Evans and the 22 anniversary of CJ's restaurant. This celebration was covered by the local newspaper. Charles Evans is loved and respected in the community. I also have a personal connection to his brother in law Keith Jones who is a great friend. After my farmers market I took the long two block walk and gave a visit. 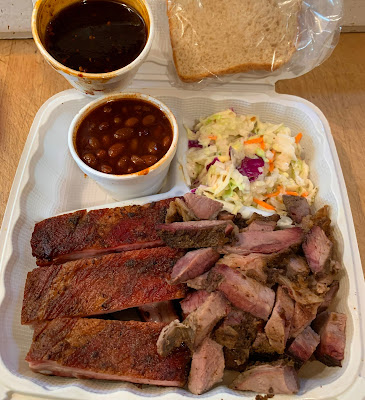 CJ's is a small venue with to-go only orders. The menu is on the wall and you place your order at the counter. I did get to meet Charles and we had a nice conversation. He is very personable and makes you feel like an old friend. The menu has the usual suspects for a bbq joint with some fried fish too. I was here to try the bbq and ordered brisket and ribs. Once home I opened the clam shell box to release the aroma of bbq smoke. Both meats had a heavy hand on the smoke. To accompany the bbq meats was a house made bbq sauce that was sweet with molasses and brown sugar. The ribs were seasoned nicely but had a little chew to them. The same with the brisket that was sliced and chopped. When you combined the sauce and meat it made for a good meal that this Mad Meat Genius finished to the last morsel. The beans had the same molasses and brown sugar theme and the Cole slaw added a cooling texture to compliment the meal.
CJ's is a local bbq establishment that is loved by the local community. Charles Evans is a popular fixture in the neighborhood. I never even mentioned the dessert case in the restaurant filled with home made cakes and pies. You know I will be back.
CJ's BBQ & Fish
2401 Macdonald Av.
Richmond Ca.
Posted by Chilebrown at 6:19 AM