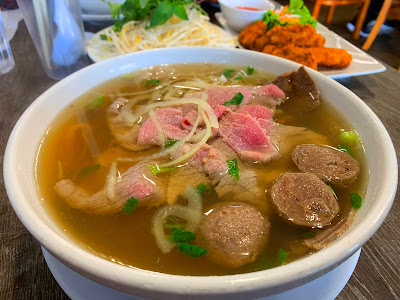 How do you pronounce Pho? I am not sure. It is a filling bowl of beef soup with noodles, spices and thinly sliced beef. We went to a restaurant called Pho Craze. It is very popular. The restaurant was pretty non-descript. You walked in the door and were assigned a numbered table. The server who was not really fluent in English took your order again by number. I ordered the number one with; rare beef, tendon, brisket, flank, tripe and meat ball. The soup was served with a plate of bean sprouts, sliced peppers, fresh cilantro and mint. It was very filling. The broth was seasoned with cloves and cinnamon which was a flavor profile I was not familiar with. The sliced beef was initially served raw but cooked in the hot broth. I have to admit, I did pick out the tripe. It was very filling. We did order some familiar chicken wing to accompany. Ms. Goofy and I tried something a little different today. 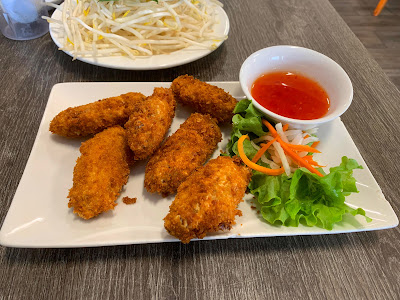