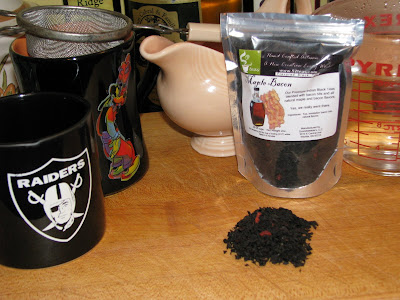 Let me start this Madness by telling you that I am tea challenged. My only experience with tea is having the obligatory cup to start your Chinese dinner. I have had too many teas from the local watering hole that were from Long Island. When it comes down to it, I am a tea novice. When I saw bacon tea, the writing was on the wall. 52.Teas.com was selling a Bacon Maple Tea with free shipping. This was too good to be true.

When the tea was received a shock and awe moment occured. This tea did not come in a dunking bag with the string. It was loose tea and I was perplexed for a brief moment. Dr. Biggles was contacted because he is very knowledgeable and he has a nice camera. He told me about some metal contraption that you loaded and suspended in hot water. That idea was not going to work for me. Some cyber research revealed that you need a teapot, kettle, strainer and tea cups. The only item that was found was a strainer. Improvisation would have to be in order. A gravy boat wold be my teapot. A glass measuring cup and the microwave was my kettle. Coffee cups would have to do. The coffee mugs were warmed and the tea was steeped for 10 minutes in the foil covered gravy boat. The liquid was poured through the strainer into the mugs for tasting.
On inspection of the loose tea, it seemed that there were little baco-bits mixed through the leaves. The smell of the uncooked tea was sweet like maple with a grassy green type odor. The steeped tea smelled like bacon according to Ms. Goofy(Tea challenged also) . I did not get that bacon smell. Ms. Goofy took a sip and proclaimed it taste like tea and set her cup down and went back to her coffee. After my sip a sweet taste was an after flavor. A couple of seconds later a bitter flavor came over my taste buds. It was awful, I could not hack away this sensation. You know what? Chilebrown will not offer an opinion of this tea. It would not be fair because; was it brewed properly? Do I even know what good tea tastes like? Wow I apologize. Hey Zoomie, You want some Bacon Maple Tea with that fruitcake?
Posted by Chilebrown at 8:06 AM

I'm not much of a tea drinker. I wish I would make nore of an effort. And yes, I most certainly noticed that Raiders cup in that photo.....geez Of course, Indianapolis is somewhat kicking our butts right now.

I'm happy to try it but if you have a real tea fan among your friends, give it to them. I like tea occasionally but I was raised in the Navy and we have coffee in our veins.

10 minutes is way too long for a black tea, 5 minutes is the upper limit, or it'll start getting really bitter. Maybe give it another go?

Ha ha ha! Very cute.
I'm a tea drinker, but I'm not a "trick" tea drinker, so no thanks.
Ryan is right with the timing. Even four minutes would be enough.

(Zoomie: I was raised in the Navy too, and the coffee really SUCKED. Ptooey. Hangar coffee.)

Well maybe I will give the tea another shot. I will get out the gravy boat and nuke some H2O.

So much for the Raider's winning streak.

Hey, I'm famous on the internets! Tea, I don't get it. Mebbe if I put some booze in it, then I'd like it more.

I drink tea when I have a sore throat. Real gourmet shit that comes in a bag, with a string even!

The rest of the time it is coffee or some hot cider.

Never got into tea, but this is a start (and I agree with Biggles, some booze is always welcome!)

Just FYI, steeping instructions (including water temperature (boiling) and steeping time (4-5 minutes) are on all of our teas. If you steeped it for ten minutes, you definitely ruined it. Also, we have had several customers comment that a pinch of salt will help bring the bacon flavor to the forefront.

If you really need the extra boost you get from coffee, you might enjoy our radioactiviTEA. It is a very stout, robust Indian tea from the Assam region in India.

Just doing my part to convert the world into tea drinkers..

Hello Frank, You are absolutely right about the instructions. I am a tea novice and did not brew the tea properly or read the intructions.

I did try the tea again. The intructions were followed. I even added a pinch of salt. The tea was very pleasent. I still did not get any bacon odor or flavor. I still will not give an opinion, because, Even though this tea might be great, I would not know it.