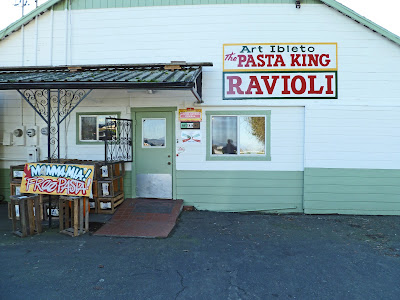 We are following a hot meat market tip from a ‘MMG’ reader named Colleen. She mentioned Ibleto’s in Cotati California. We did a little research on the World Wide Web and found that Arturo Ibleto is the ‘Pasta King” of Cotati. He also shares the same last name as my good friend Angelo from Petaluma. It is a small world because Angelo has mentioned his brother several times and I just have never connected the dots. This will be a double treat for a ‘Meat Adventure’. If Art is anything like Angelo we will have found a new meat destination with pasta. 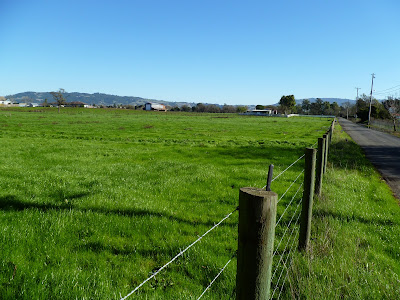 Ibleto Meats is located a couple of miles off of the main Highway 101. The houses are divided by green and luscious pastures. You will see a couple of signs proclaiming fresh pasta and the “Pasta King”. After pulling into a small driveway you will see a small barn like building. It looks similar to Angelo’s Meats in Petaluma. 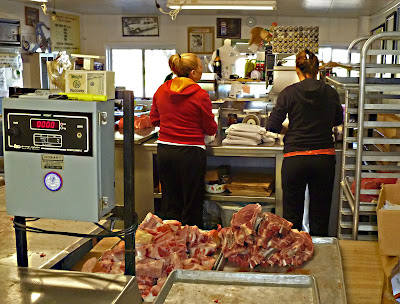 We walked into Ibleto’s and saw several people cutting and wrapping various cuts of meat. We asked one of the butchers, Bill, if Art was there. Unfortunately Art was not, but Bill graciously showed us the establishment. Bill is pictured with a wild boar that is prevalent in this area. 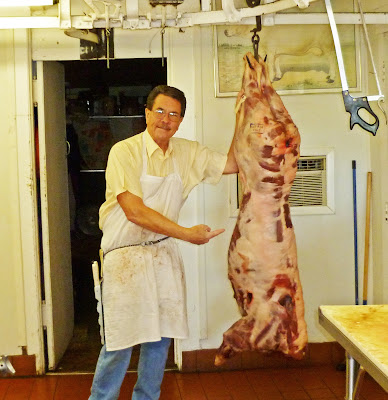 There are a couple of freezers full of pasta’s, ravioli’s, soups, lasagna and different sauces. An honor system is Ibleto’s unique way of paying for your purchases. You pick your products and total your purchase and just leave the money on the table. “Wow”. Pasta is King here at Ibleto’s but they do sell a bunch of Angelo’s meat products. They will also custom wraps your meat projects. We loaded up Ms. Goofy’s ‘Formula One Racing Honda” with ravioli’s and pasta and headed home to get some water boiling. 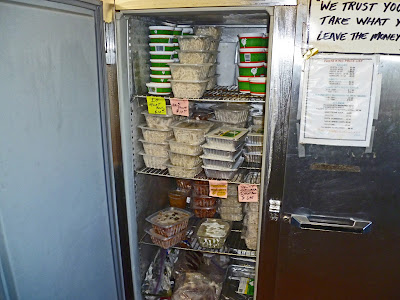 I wish we could have met Arturo. Bill told me his Italian accent was just like Angelo’s, or is it the other away around. We had some tagliarini the first night and it was melt in your mouth good. Fresh pasta is a treat. Some ravioli with prime rib was served several nights later. It was so good I broke out into song, which I will spare you.. From what I have tasted, we will have to agree. Art Ibleto is the ‘Pasta King”. 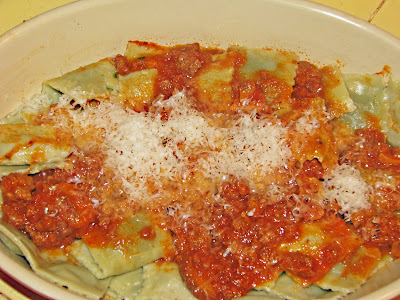 I only have one thing to say: "Thank gawd football season is over"

highlandsranchfoodie, I am going to watch the Bowl games with a big ole bowl of pasta. I may live on the couch for the next week.

I will have to check this place out - sounds like fun and you gotta love a place that trusts you to pay the correct amount!

Zoomie, That was unique about paying. I am going back for more pasta. Hopefully, I will get to meet Art. If he is half the character of Angelo he will be fun to meet.

Let me rephrase that "I'm so glad Bronco Football Season is over" :-) We've finally been put out of our misery. I'll be watching bowl games and of course playoffs and Superbowl.

highlandsranchfoodie, I know. I got your drift. The Raider season was less painful this year.

When we were there it was a strange feeling to pay like that. I also had their pasta a party catered by them.They made polenta with a sauce that was killer.

Greg, I heard he has a green polenta. Did you try any?

Shoot, you missed the best part "Here's is Elway with God" ...oh no that was Harbaugh.

The some of the farmer's stands are like that in Western North Carolina, using the honor system. Such a cute little place, looks well worth a drive.

Now, it's over two years since this thread began. Art Ibleto is still going strong. In fact at age 86, he has opened a restaurant in Rohnert Park, just a couple of miles from "The Pasta King." It is "Art's Place" on Rohnert Park Expressway in the FoodMaxx-Petsmart shopping center. Check it out.

DISCLAIMER: I have nothing to do with Art other than being addicted to his pasta!