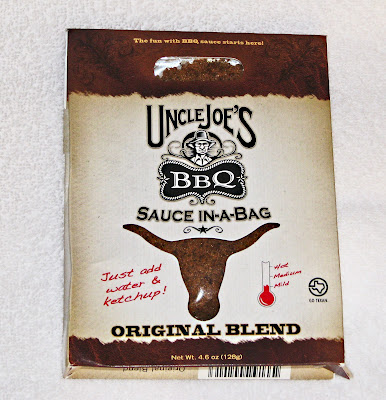 Just when you are getting used to the notion of sliced bread, somebody reinvents the wheel. I am talking about “UNCLE JOE’S BBQ SAUCE-IN-A-BAG”. This is a product that thinks outside the bottle. Just add water and ketchup to the bag of spices, heat and presto change-o you have barbeque sauce. Uncle Joe’s claims; no salt, no msg, and ‘the fun with bbq sauce starts here’. Uncle Joe encourages you to have fun and customize this bbq sauce by adding your own accents such as honey or cayenne. This bag of spices can also be used as a rub, in salsas, cole slaws and even includes a recipe for bbq chicken teriyaki. The instructions for making the bbq sauce could not be easier. Simmer contents of package with ½ cup ketchup and 1 ¾ cup of water for 4 minutes, remove from heat and let cool. We will give this sauce a try on some bbq beef ribs. 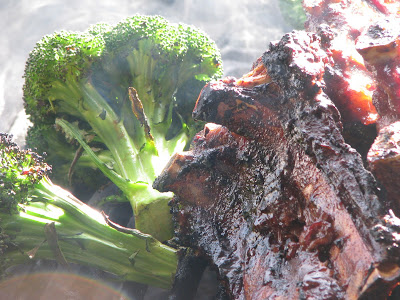 We followed the instructions and the end sauce was a little on the thin side. It smelled of cumin with a little hint of smoke. The taste was pleasant and familiar. It was not overly sweet and had no heat whatsoever. The sauce was basted on some beef bones that had been grilled on the que. The sauce did carmalize and made the ribs glisten. The ribs were a pretty site. The ribs rocked our world with flavor. They were fall off the bone smack-o-delish. Uncle Joe said it himself; you can customize your sauce. It did need some more sweet and heat. ‘Uncle Joe’s sauce-in-a-bag’ is unique, convenient and fun. It would be great for that camping trip. It can be used as a base for your own custom bbq sauce. We had fun!

Uncle Joe’s BBQ Sauce in-a-bag
Posted by Chilebrown at 7:27 AM

Interesting idea - especially because you can play around with the flavors and adjust to your taste. But I'll bet you and Ms Goofy could easily invent a similar mix that would be more to your taste.

Thank you for trying Uncle Joe's BBQ "Sauce in a Bag". I created it with everyone in mind. Yes, you are right on it doesn't have a lot of smoke in it and the reason behind that was; when I go the trouble of smoking my meats and using just the right the wood flavor I don't want to cover it all up with a heavy smoke flavored sauce. Even the "Honey Mesquite" only has a small amount of mesquite but don't worry it is predominate enough for indoor cooking. Also the thickness is all dependent on temperature you cook it at or method microwave or over heat and timing.

Maybe you would like to try one of the other blends. In addition to the Original Blend and Honey Mesquite which are both very mild we have Chipotle and Southwest (Habanaro is the additional chili added) yes they both have a kick! You can still kick them up even more with white pepper (which won't change the flavor) cayenne pepper, habanero (powder, juice or chopped), black pepper (coarse is nice), Chinese mustard and etc.

Most important is the liquid you use water, "BEER", Cola, Root Beer, Cherry Cola, Ginger Ale, beef or chicken broth and etc . . . it is endless.

Yes anyone can invent a similar mix but why? Check out my website at unclejoesbbq.com. My company is small as in there is no us, we, they it is just me! Sandy

Zoomie, This is a fun and convenient product. You can put your signature on it.

cookiecrumb,You are such a Goof! I am as commercial as you are tye dye garden tool challenged.

Very interesting concept. There is a lot to like about it. One important part if sized right is not having 15 half bottles of different sauces taking up the fridge:)

If you want to try it send me your address I will get you a sample out. How about that for a deal! It is fun and tasty!

Go to the website and my email is there. Also don't forget to leave your address in the email.

Is it available to buy