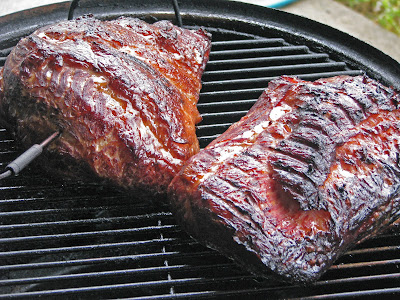 Did you have your fill of green beer? Everybody has a little Irish in them on St. Patrick’s Day. My green beer swilling days are long past. That is to say the beer is just not green now. It is the day after and it is pouring rain. The wind is so strong the rain is coming down sideways. It is not the most ideal day to fire up the smoker. I am on a mission to bring the Mad Meat Genius readers some smoked corned beef. We are going to smoke some ‘On Sale’ corned beef, point cut that we picked up at the ‘Local Wally Mart. This is too good a deal to pass up. Put on your raincoat and grab a green beer and let’s smoke some corned beef. 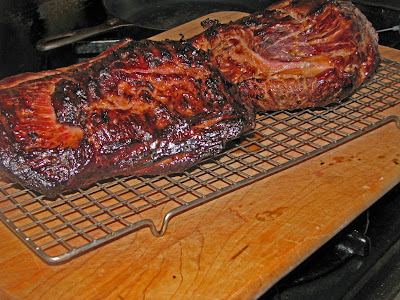 The corned beef is very salty coming out of its package. I soaked it for 24 hours in cold water. It was put it in a pot that went into the refrigerator. The water was changed several times. When smoking meats it is a good idea to let them form a pellicle. This will prepare the meat to accept more smoke. This is achieved by putting the meat on a cooling rack and placing in the refrigerator, uncovered, overnight. The smoker was lit and that was no easy task in this rain storm. It was smoked with several chunks of hickory wood. The meat was cooked at 230 degrees for approx 6 hours until the internal temperature reached 165 degrees. Once our target temperature was reached they were pulled and wrapped in aluminum foil. They were held and rested for several hours in an insulated ice chest until dinner time. 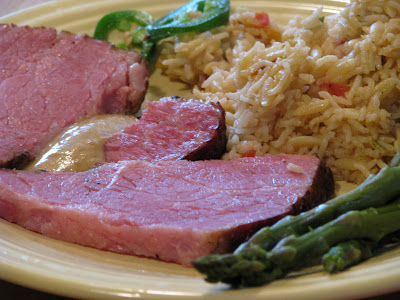 You may have noticed that no seasoning was added to the meat at anytime. That is because even though we soaked our meat it still had plenty of flavors from the brine. The beautiful smoke seasoned this cut of brined brisket to perfection. It was smoky and very tender. We served it with our favorite spears of spring and some home made Rice-a-Roni. Today, I will take our slicer and cut some thin slices for some tasty sandwiches. This procedure of soaking the salt out and forming a pellicle is a time commitment but is so worth it. Happy St. Patrick’s Day to everyone, let’s raise our glass and toast. “Everyone is wise until he speaks”
Posted by Chilebrown at 7:43 AM

I just smoked one too. Doesn't it feel weird taking a brisket off at 165?

Chris, You never gave me the answer on how yours tasted at 165. I know you steamed yours to warm it up. Ours was tasty and tender. The next step is after they have cooled and putting them on a slicer.

Cookecrumb. That is the nicest thing you have said to me all weekend. Ya Goof!

Tongue hanging out over here.

Good golly man! I bet those dark outside pieces were the best.

Looks great! I went 350°F for 3 hours and yours got a lot darker and (I'm guessing) smokier than mine. Happy St. Paddy's to you!

I did my first corned beef a couple of weeks ago on a Weber kettle, and was very happy with the results. Definitely agree with soaking to get some of the brine out, I didn't and it was just a tad on the salty side.

I'm thinking about some burnt ends treatment next time, have you ever given that a whirl?

Zoomie, Have you used your smoking canister or smokign bag?

Zia, I wish we had smell-a-vision. Right out of the smoker it smelled so good.

Greg, The crust was smoky but the center was so moist and tender. The smoke flavor permeated the whole roast.

foodfire, Corned beef is brined brisket and low and slow works the best for me.It just takes a lot longer.

Chuck M. Burnt Ends are our latest favorite BBQ dish to make. It is a two day event but worth it. You can type in burnt ends in the upper left hand corner of the home page of Mad Meat Genius and see some of the results. Good luck and report back soon.