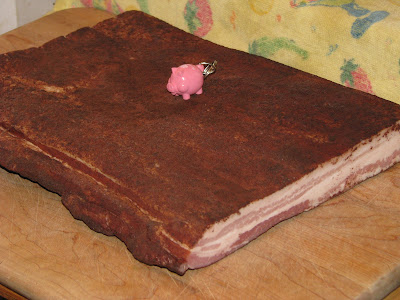 Bacon Revue will sweep the stage and polish the spotlights to present this spicy cured bacon. We are sauntering across the field, 'moo'ing' across the tundra, and grazing across the stage of pork belly delights. Manas Ranch has cured and smoked some pork belly's with a certain spice for this entertainment extravaganza tonight.

Cinnamon, I will have to repeat Cinnamon. Open this cyrovac package of wonders and you will smell cinnamon. Most bacon is cured with sugar, salt, and some sort of spices. This cinnamon girl has a coat of this spice and brown sugar. Cutting into the slab reveals a meat to fat ratio that leans toward to the fat. There is no rind present. (Bonus Chilebrown points for no rind.) 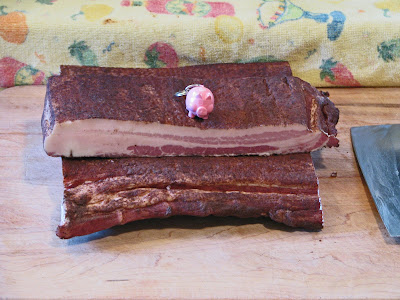 Smoked Dakota sausage wrapped in bacon sounds like a winner in our test kitchen. A few toothpicks will secure these meat wrapped tubes of love. They will be blessed on the cast iron vessel of bacon rendering Does the house smell like bacon heaven? Oscar, Lucy and Ms. Goofy are dancing tail spins of anticipation for bacon/cinnamon greatness? It smells like a Holiday breakfast treat. The combination of bacon fumes and cinnamon are like catnip to us. Lucy and I are rolling around the floor waiting for diner until Ms. Goofy told us to knock it off.

Bacon with Cinnamon sounds a little different and it is. When the bacon renders it fat and starts to heat the cinnamon magical moments will occur. The smell will overtake your cooking area. This is a comforting smell that brings taste bud memories of waffles, pancakes and cookies. 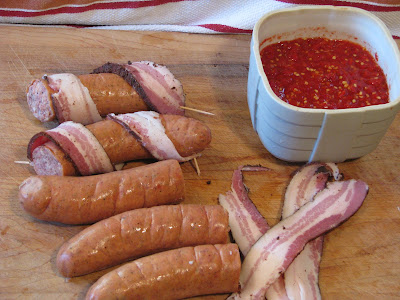 Today's bacon from Manas Ranch will receive 3.5 stars out of five. This is good looking bacon with it cinnamon crust. It fries up crisp with a smell that may be worth the price of admission. The slab may be hickory smoked but does not show up in the final product. The salt and brown sugar has a great balance. This is some over the top great breakfast bacon with a cinnamon twist. 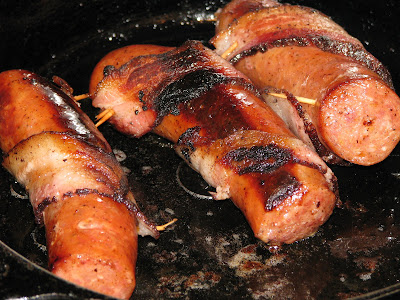 Posted by Chilebrown at 4:35 PM

That sounds heavenly to me - perfect with a waffle, too!

Did you really like it? It looks good, but over seasoned. And I prefer cloves.
Still, we appreciate the research, you poor, tired man.

Zoomie, It would be perfect with a waffle. It is unique and we like it.

cookiecrumb, Retired. Not a clove fan. The cinnamon does not overpower the taste. The aroma sure is strong.

Greg, Bacon & Sausage are two of my favorite food groups.