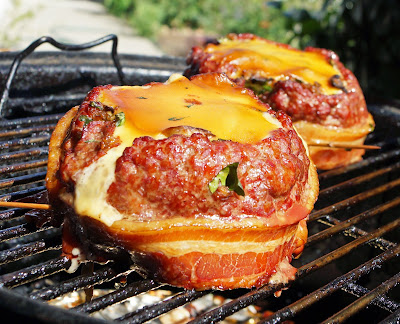 This meal was so amazing that we had to share it with you. These are stuffed hamburgers wrapped in bacon and then smoked. Oh my gosh were they fantastic. The technique of creating these burgers is shown in the video below. The burger meat is formed around a cold beer can. The beer can is removed to reveal a cavity that can be customized with your choice of stuffing. We have also changed the recipe to cooking our burgers in a smoker instead of a covered grill. This will add another component of smoke. Our wood of choice today is apple wood. 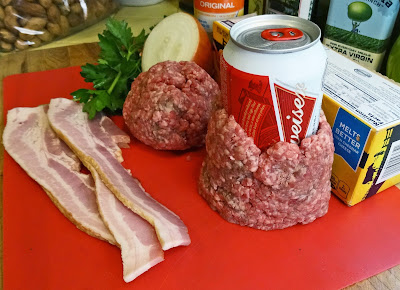 Our hamburger and bacon was sourced by our friend Angelo of Angelo's Meats. Our stuffing includes mushrooms, young garlic, onions, bread crumbs (made from toasted fresh bread), cheese, and parsley. The onions and garlic was briefly given a saute in olive oil. The heat was raised and the mushrooms were added. A dusting of salt & pepper is mandatory. Once the mushrooms were nicely browned the heat was turned off and I added a pat of butter. The bread crumbs were added and stirred to combine.The mixture was removed from the heat and cooled completely. The parsley was chopped and the cheese sliced. The parsely was added to the cooled mixture. I place a slice of cheese on the bottom of the burger cavity. Then stuffing was added. A slice of cheese was put on top to cover. Bacon was wrapped around the burger and secured with a toothpick. It is time to cook. 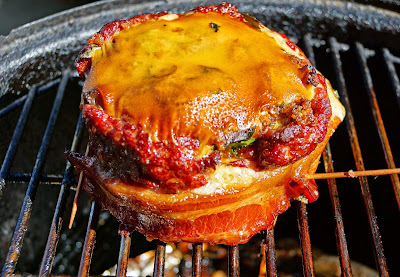 I smoked our burgers for one and one half hour. It was so tempting to lift the smoker lid to watch their progress. I could smell bacon rendering and sweet apple smoke. Oh my! They looked and tasted fantastic. This  recipe is a keeper. The nice thing about this technique is that you can customize it to your desire. The fillings and topping combinations are only limited by your imagination. Have fun.

I am drooling over this.

Big Dude, This recipe is a keeper. What is fun about it,is you can stuff it with anything you want.

I have seen these everywhere for the last month. Thanks for the write up Chilebrown. Just may have to try them since you give them your seal of approval.

I can understand why this technique and recipe is making the rounds. It is because it is easy to make, you can customize it to your liking and it is darn tootin tasty. Fun and tasty.

I guess I'm going to have to break down and try these, especially if you swear by them like you are. They have to be good.