Welcome to the Bang-Bang. I  met up with fellow ‘KCBS Certified Master BBQ Judge’ Ben Lobenstein to eat two successive barbeque meals. Our first stop is Cathead’s BBQ located in San Francisco. Cathead’s BBQ has their own adjacent private parking lot, so parking karma was not needed this stop. The outside is painted a bright red with a whimsical mural on the wall. Cathead’s looks fun before we have even stepped through the door. 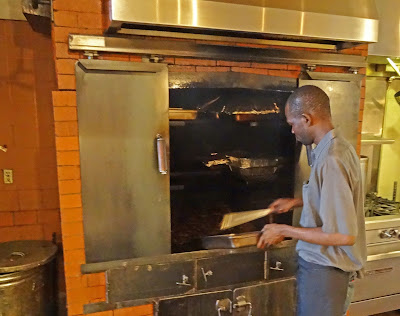 I arrived several minutes early and got a chance to meet with one of the owners; Richard Park. Richard is half of a culinary trained husband and wife team. This spot originally housed ‘Big Nates BBQ’ which was an iconic bbq restaurant. This place has been open for over three years. Where have I been? Richard explained how everything is house made from scratch. He uses different woods for different meats such as cherry and apple wood. They also host a yearly bbq competition that features other local bbq restaurants. Richard brines his brisket in Coca-Cola. Ben arrived and it was time to order. 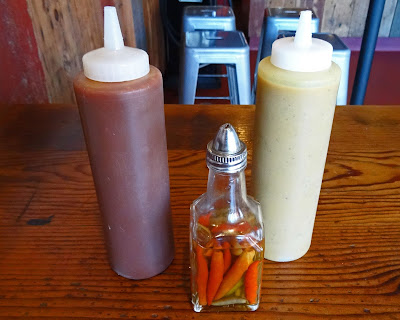 The menu is fairly large with the standard bbq option and daily specials. There are a lot of creative side dishes. Every meal is accompanied by a small house made buttermilk biscuit. You can order their signature large Cathead size biscuit which is accompanied by honey butter and pepper jelly. Of course I wanted to try everything but we were on a Bang-Bang. I ordered my usual brisket and ribs. Here was the fun part. My sides were: habanero cole slaw, bacon creamed corn, and pimento mac & cheese. 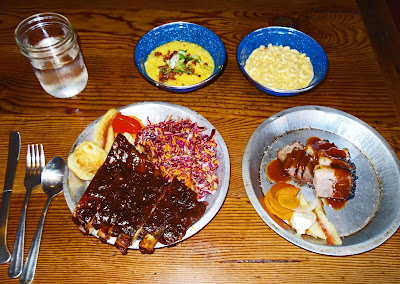 Our names were called and it took several trips from the counter to deliver our large meals. Cathead’s BBQ does not hold back on the proportions. Each and every plate was crafted and sculpted to look yummy delicious. Let’s start with the proteins. The ribs had a flavorful dry rub and were smoked to a wonderful degree of doneness. There was some house made sauces available but were not needed. The Coca-Cola brined brisket had a great bark and a nice level of smoke. It was tender and satisfying. I did not use them but there was a wonderful mustard/vinegar sauce, tomato based sauce and a pepper infused vinegar available tableside. 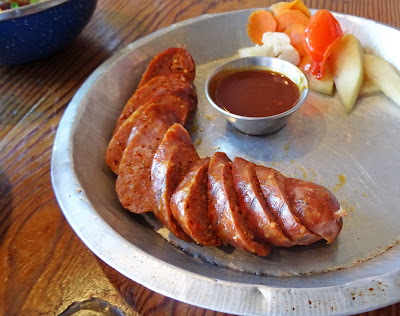 The side dishes shined with care and beauty. Fresh corn creamed, studded with bacon was, ‘Oh so good’. I would of sworn cream had been added but was informed it had not. The habanero cole slaw was vibrant and had a kick that made this Chilehead smile. The mac & cheese was gooey and rich with the added bonus of pimentos. Overall it was a colorful and satisfying meal. 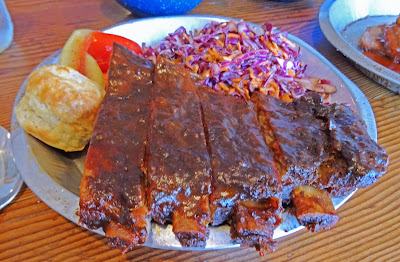 Cathead’s BBQ is now a destination restaurant in our itinerary. It hit on all cylinders. This meal started out on a good note with just the simple pleasure of parking and the festive mural painted on the colorful building. The barbequed meats are the stars of this show but the side dishes were spectacular. We got into our cars and journeyed to our next destination of Baby Blues BBQ 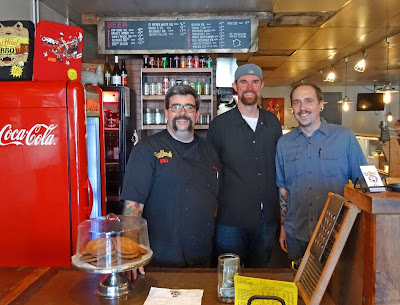 I just want to grab that link right off the plate! Good shooting!

Greg, I did not mention the link because Ben ordered it and I forgot. It was house made and had a wonderful spicy bite. Very tasty.

That looks great. The habenero slaw has me the thinking of some experimentation at home. As for hot links, they are the hidden gem of the BBQ world. Do they smoke turkeys as well?

Three Dogs BBQ, The slaw was awesome and so were the links. I do not know about the turkeys but will not mind returning to find out.