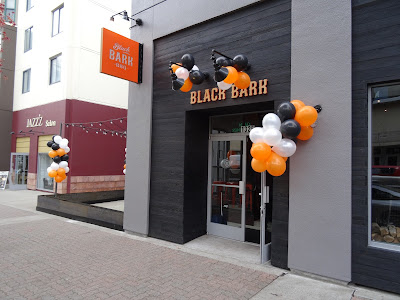 There is a lot of excitement going on in the ‘City’ with the long anticipated 'Grand Opening' of the bbq restaurant Black Bark. We broke the cardinal rule of going to a new restaurant on day three of its Grand Opening. I guess we had the ‘hardly can waits’. The Great White Hunter and I were on a mission to see what all the hype was about. I know it pains The Great White Hunter to admit, I really do have good parking karma. Granted, I pulled a highly illegal maneuver to secure said spot but we parked almost right in front. We got in line and prepared ourselves to experience Black Bark. 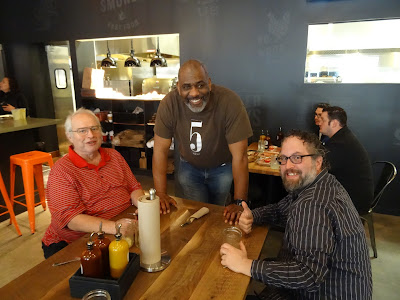 David Lawrence is the chef/co-owner of this new dinning establishment. He owns another successful restaurant across the street; “1300 on Fillmore”. He made an investment of buying two brand new ‘Ole Hickory’ smokers to feed the bbq hungry masses of San Francisco. He also hired a former pittmaster Lance Nicholson  from  iconic bbq restaurant Memphis Minnie’s. He hopes this combination will be a success. The place was jumping and packed with fellow hungry bbq enthusiats. David Lawrence took the time to come greet and talk to customers even though he was definitely very busy. If the crowd is any indicator, Black Bark is off to a good start. 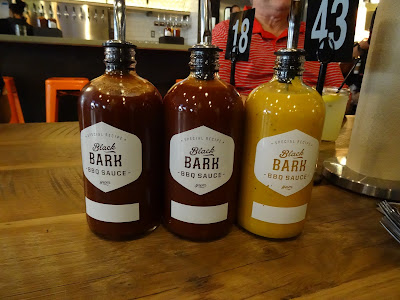 We move through the line and make our bbq choices from a menu billboard. The usual suspects for bbq are available with meats sold by the half pound.  Our orders are placed and we received a number. We luckily grabbed one of the last tables available even though the place had only been open half an hour. Our orders were delivered very promptly which was impressive because of the crowd.
Each table has three house made bbq sauces. Two were tomato based sauces, one hot and the other mild. The third was a mustard based sauce. They all were tasty with the mustard being my favorite. Our plates were delivered and they looked fantastic. The entrées are served on a butcher paper lined cafeteria style trays. The Great White Hunter had a Cheshire grin with his delivered tray. Okay, drum roll please. 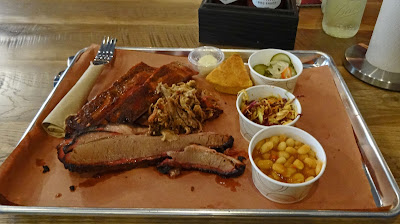 I ordered a three way combo of pork ribs, brisket and pulled pork with the sides of slaw and beans. I also had to order a side of corn bread and house made cucumber pickles. Let’s start with the brisket. Wow! This could have been entered into any competition. It was beautiful with its smoke ring. It was tender, had a flavorful bark and just the right amount of smoke. The pork ribs were spare ribs with the rib tips attached. These were cooked to perfection. The seasoning was not overly assertive but pleasant. I dipped them into all three sauces and finished with finger licking. (Sorry Mrs. Macintosh). The pulled pork had perfect smoke flavor, tasty bark and was tender. I especially liked this with the mustard based sauce. 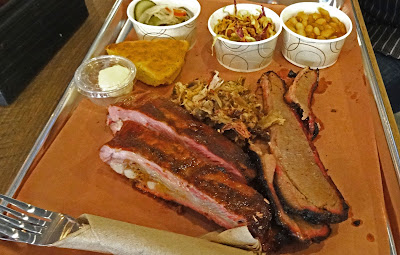 Side dishes are so often pedestrian at bbq joints. Not at Black Barks. The beans were not traditional bbq beans but more of a creamy white bean cassoulet style. They were fantastic. The slaw was tangy. The cornbread was moist and corny good. House made pickles rocked my boat. They had a vinegar tang that was sweet and fresh. We are hitting the mark on all cylinders today.
Black Bark is a reason to get excited about Barbeque again. I was impressed by the quality and enjoyment of all my food offerings today. The Great White Hunter will finally have to admit that parking karma is real. He enjoyed himself but only communicated this by his usual grunting. We wish David Lawrence the best with his new bbq restaurant. Black Bark is open and ready to impress. 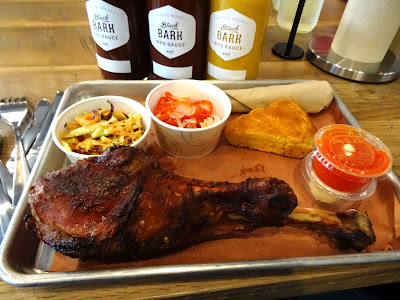 I don't know where to begin here. My mouth is watering. Competition quality brisket at a restaurant? Outstanding! One final note, mustard sauces are my favorite. When done right, they are downright good! Happy Monday...

Mr Brown, I just have to say that your driving style in the city is just scary. I cannot count how many times I was white knuckles, hanging on to whatever I could riding in the passenger seat. Now that I've had a couple days to think about your driving and parking karma. I would call it suicide parking karma in which you use your e brake to do a u-turn to get a spot to park.I love your version where you make a leisurely three point turn in the middle of Fillmore that was illegal. GWH OUT

Mr.brown after having time to settle down after reliving your exhibition of stunt driving. I would like to review black Bart's BBQ. My thoughts are this is probably the finest barbecue restaurants I've been to. The brisket was just wonderful, the the sides were so very good, so good I would go just for the sides.(greens mac and cheese pickled cucumbers and the pickled hot peppers)
Even if you were driving Mr Brown I would go to this restaurant which if anybody is driven with you before knows how much danger you are in when you go drive with you to the city. GWH out with a Cheshire grin

Big Dude, Black Bark was firing on all cylinders. We shall return.

greatwhite hunter, "Don't Hate The Driva" If memory serves me correct and Ms. Goofy is my witness you actually said when we were on our Meat Adventure in Santa Rosa; " I like it when you (Chilebrown) are driving". Where do you want to go on our next Meat Adventure?

Love it!! Must go eat now. Dieting is a beach!

Greg, I know you have to diet to prepare for your next cruise. I know you eat very well 24 hours a day. What fun.

Mr Brown I only enjoy driving with you when Ms Goofy's there to keep you in line.