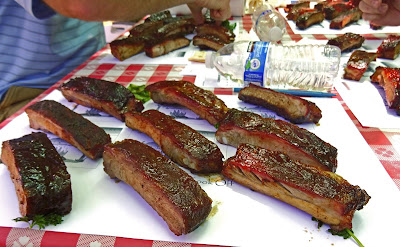 It was not really a top secret rib competition but they did not allow me to bring a camera on to the complex. In fact we had to get security clearance and wear identification. Ms. Goofy and I just finished judging a rib & chicken cook-off at the Lawrence Livermore National Laboratory. You may ask what is the Lawrence Livermore National Laboratory?. This is their mission statement from their website:

Lawrence Livermore National Laboratory has a mission of strengthening the United States' security by developing and applying world-class science, technology and engineering that:
This was a competition between 12 teams that represented different departments within the facility.
The call was put out for KCBS certified judges and we just so happen to own a couple of shiny badges. The rules were loosely based around KCBS rules but decoration and garnish were the stars today. We saw a lots of grilled vegetables, pineapple, peppers and anything colorful to grab the judges attention. A few entries included corn bread, beans and slaw. As judges we were impressed. The chicken entries consisted of boneless chicken thighs. All meats were provided to the teams. We did our best to pick the best and believe it or not the overall winning teams name was "The Best". What a fun day. After our judging duties were done we were treated to more bbq in a catered lunch.

BBQ competition has opened many unique and fun opportunities. It is not everyday you get to judge a contest at the Lawrence Livermore National Laboratoy. The image above is one of my stock photos because security would not let me use a camera. The day was over and we were instructed to return our security badges. We were informed that within 24 hours they would self destruct. I believe them.

Posted by Chilebrown at 2:25 PM

Mr Brown your post reminded of the good days.Imagine a bright sunny day at the salt mine on a route I have never had the misfortune to drive. I was lost most of the day and I had a assignment to the Lawrence Livermore National Laboratory. Mr Brown you may or may not have noticed that the unarmed security officers do not have a sense of humor, especially if the GWH get lost and drives around in circles. Security will come out of the nice air conditioned guard shack and hunt me down and straighten out the GWH out. The best of part of this story is my next assignment was Sandia National Laboratory and the armed security officers there may have a sense of humor, when I arrived two officers jumped in the truck and informed me that they had heard of the GWH and that joy riding was not allowed on the Sandia campus. I think someone dropped a dime on me. The officers rode around with me on campus and made sure I behave my self. I finished my assignment and dropped the officers at the main gate and fired up the after burners, only to get lost in the old mines area of Livermore what a great day. Its time for the GWH To GET LOST

I think it's great when businesses let their hair down and hold an event like this. Good of you to help them out with high quality judging.

greatwhite hunter, I think you are lucky they did not use you as a target in one of their tests. I too remember the joys of Livermore but my memories are of the blistering heat.
P.S. Have you called Willowside and ordered the half steer?

Big Dude, It was pretty impressive event. They had a band that played which consisted of employees. They had a good turn out of employees. I cannot imagine much got done the rest of the day after eating all the great food.