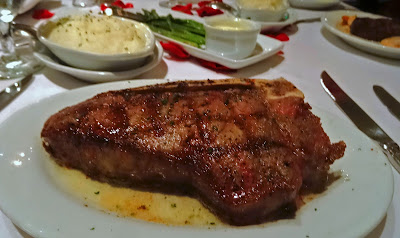 Ms. Goofy and I celebrated our anniversary and my birthday the other night at the Ruth Chris Steakhouse. Yes, we got married on my birthday. Mama didn’t raise no fool. We had a nice diner with good food and service to match. (?). The question mark will be addressed later. The food was very good evident by this 19 ounce bone-in USDA Prime New York strip steak. We are not reviewing our dining experience today but will expound on a couple of observations.
The first is the dress code. Ruth Chris is a high dollar steak house. One has certain expectations. It is nice to dress for the occasion and Ruth Chris advertises a dress code. We dressed in our fancy duds expecting the same by other diners. This was not the case. This particular Ruth Chris totally ignores  their stated dress code of business casual. We were surrounded by two tables of Gentlemen wearing t-shirts and jeans. One patron’s jeans even had holes for everyone to witness. His son was wearing a beanie and could have possibly been in a ‘gansta rap’ video. Do I sound jaded. I have not even started. 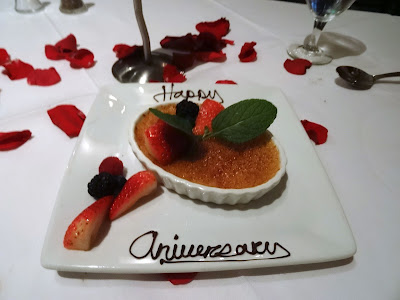 My next and final rant or observation is my beloved crumb sweeper. As some of you may know I take great pleasure in watching and experiencing the art of crumb sweeping. The dinner is winding down and the entre is complete. The waiter clears the table to create a clean slate for possible dessert and or after dinner drinks. There is one task that needs to be done to complete this scenario; ‘The Crumb Sweeper”. Our waiter had an assistant who helped with the dining experience. He was pleasant enough and professional. The table was cleared and he reached into his pocket for an implement of crumb sweeping. He had a special fine tooth comb that was made for this all important chore. He reached down to the table without even glancing and painted a figure eight pattern with his crumb sweeping comb. Now you know I had strategically left some wayward crumbs for my own amusement. I was scorned by our server’s callous and weak attempt at crumb removal.  He did not look or care but gave us a perfunctory crumb swipe. I was disappointed.

This was not meant to be a review. We did like the food and the service was good. Should you rate a restaurant on the enforcement of a dress code and a crumb sweeper’s performance? I have and probably will not return to Ruth Chris Steakhouse..

Our 17 y/o takes his girlfriend to Ruth's Chris every now and then but I haven't been there in almost 20 years. But we make him wear a sport jacket or suit because I always remembered the request for gentlemen to wear a coat.