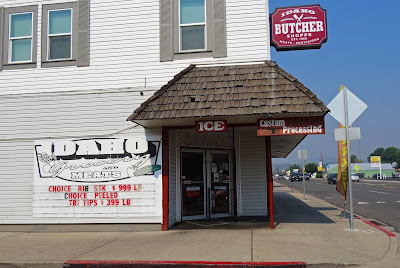 Sometimes our best meat finds are tips from locals. We were told that we must try the chorizo from the Idaho Grocery in Susanville, California. We actually had driven right by it on our way to the fairgrounds. Ms. Goofy spotted the sign but we did not stop because we were on our way to the bbq competition. Julie, the KCBS rep asked us if we had stopped at Idaho Butcher Shoppe and we must try the chorizo.  Say no more. I hopped back into the racing Honda and sped back to Idaho Butcher Shoppe. 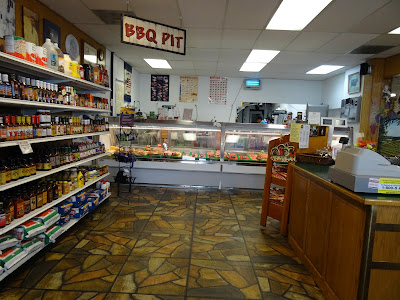 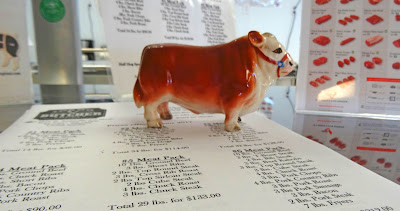 The Idaho Butcher Shoppe is part of a small family run grocery store. There were three butchers on duty. They were busy slicing and dicing in the back room. The refrigerator case had a nice display of the usual suspects of yummy meat delights. I asked one Butcher if they had the house made chorizo. He steered me to the freezer case in back. Sure enough there was a selection of their locally favorite chorizo. I did have the option of regular or habanero flavor. Both flavors were put into my cart. I had to rush back to the fairgrounds because I had judging duties. 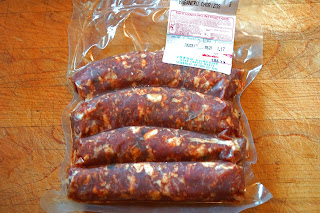 Several weeks later I had a chance to sample this chorizo. I cooked the habanero flavored chorizo. The habanero pepper bite was on the mild side. This was a little surprising because habanero peppers have a reputation of being a super-hot pepper. Sometimes chorizo can be very greasy but this was not the case with Idaho Butchers sausage. The spice blend was complimentary and flavorful. This was a very well balanced sausage. It is always nice to get a heads up on a meat find. When we return to Susanville I will have to further explore Idaho Butcher Shoppe.

Big Dude, I love small town butchers. Ms. Goofy spotted them right away which is quit remarkable because she was driving the Racing Honda at break neck speeds through town.

Lisa is that where we bought the beef sticks?

My son brought some Basque Chorizo back to Reno for me. All I can say is, they are definitely Delicious!! Wish they could ship out but I will making a little trip to Susanville to purchase quite a few!! 😋😋😋❤💕