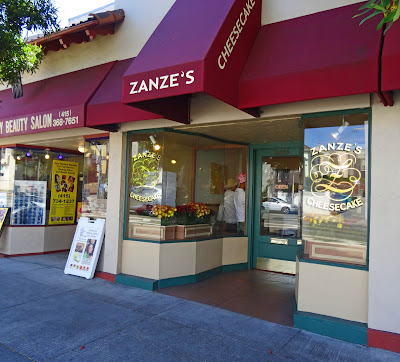 I love a good piece of cheesecake. Operating from a hot tip from our bbq friend Ben, we were told about Zanze’s Cheesecake.  Zanze’s is located in the City. (San Francisco). Cheesecake is the only thing sold at Zanze’s so this sealed the deal and I needed to brave the drive to S.F. and pick up a cake. Parking Karma was present today because I found a parking spot two doors down from my destination. This is a good sign for cheesecake bliss to come. 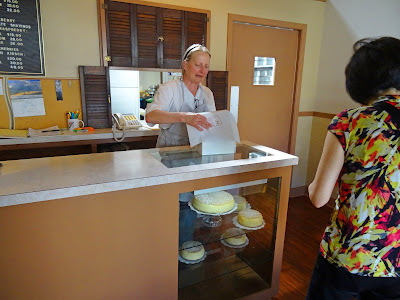 Zanze’s is a small shop. It is also very popular by the amount of customers waiting for cheesecake. Inside, there is a small counter with a window displaying some plain cheesecake and only plain cheesecakes. There is a sign board listing several variations of topping for this plain cake. It was my turn to order and I received a quick “Seinfeldish” lesson in Zanze’s cheesecake etiquette. 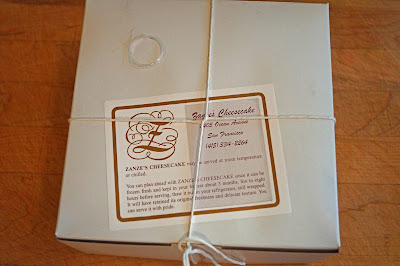 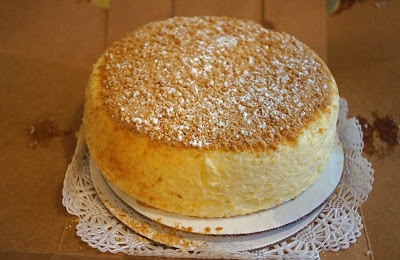 I asked for a cheesecake with a cherry/kirsch topping. The clerk said I had to Pre-order. I asked for a medium size plain cheesecake. The clerk said Pre-order. I asked’; what can I buy? She said a small or a large cake.  I choose a small. She then explained the cutting procedure which uses included small plastic floss like string. (Pictured on upper left of cake box image). I took my cheesecake and rushed home as fast as Bay Area traffic allowed to give this cake a try. 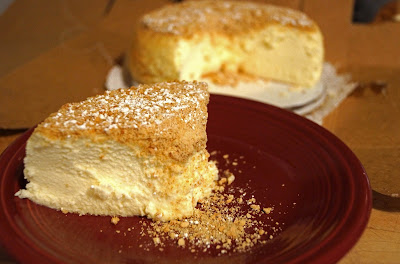 I followed the cutting instructions with ease. This cheesecake is very light, airy, fluffy, and mousse like. This is heavenly and of course rich. The crust is light and crumbly too. It is very good. This cake is so light that it does not even fill you up like traditional N.Y. style cakes. The locals that live near Zenze’s have a great asset for cheesecake. We now know the rules involved to purchase a Zanzes cake; Pre-Order.

What Mr Brown you want to be able to order your cake and eat it too? Selfish very selfish. Beware the cheesecake Nazi, GWH OUT!

great white hunter, Anytime you need me to demonstrate my parking Karma, I am available.

Chris Horgan, I did go by 'Psst' twice now. I was in the neighborhood and stopped. They did not have any cheesecake. I unfortunately remembered my first visit. My first visit, was in search of cheesecake that I had read about. They were out and I ordered a coffee to-go. My coffee came with a big side of employee "attitude". I will not be returning.

Yummy.. I really love cakes and pastries , Really love this one as well . I am going to bake this cake someday at home for sure. Thank you so much for this delicious recipe :)