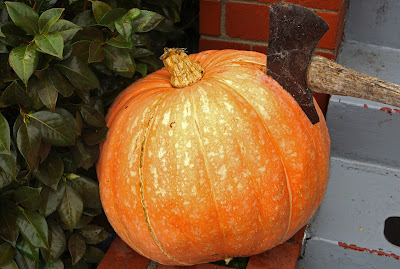 It was an eighty five pound orange beauty. That is till I drove an ax through its thick pulpy flesh. This is not a horror story but an attempt at harvesting pumpkin seeds from my "Great Pumpkin". A few quick chops made easy work to scoop out the seeds. There were surprisingly few seeds for such a big pumpkin. The seeds were put into a colander and rinsed with a garden hose. They were then spread out on newspapers and allowed 24 hours to air dry. 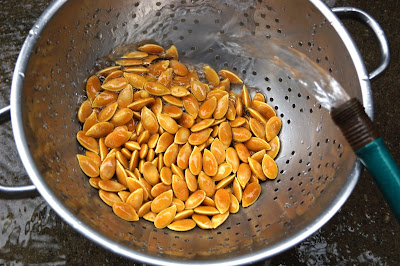 The seeds were put into a bowl. I then added a large tablespoon of olive oil and a dash of salt. The seeds were coated and then put into a cast iron pan for roasting. A 300 degree oven for 45 minutes stirring occasionally. This was easy peasy to make a healthy home grown snack. I even saved a couple of unroasted seeds for next years "Great Pumpkin" 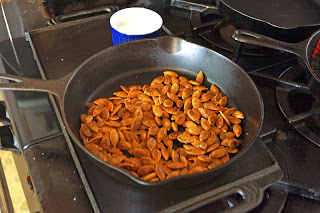 Posted by Chilebrown at 2:50 PM