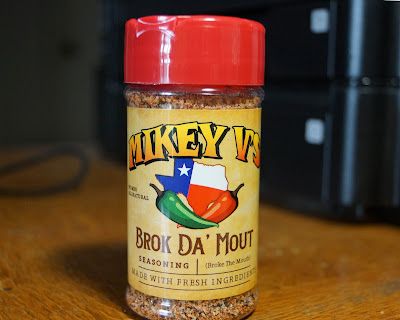 We are trying a couple of products from Micky V’s hot sauce company. I received a basket of goodies this Christmas from my Secret Santa and it was full of Mick V’s products. We will be sampling a rub called “Brok Da Mout and a barbeque sauce called Brotherton’s Black Iron Barbeque sauce. Micky  V’s website does not have a lot of information on these products except they are made in Texas. We will look at the ingredient list and give it an old fashion taste test. Micky V’s does offer this about Brok Da Mount. 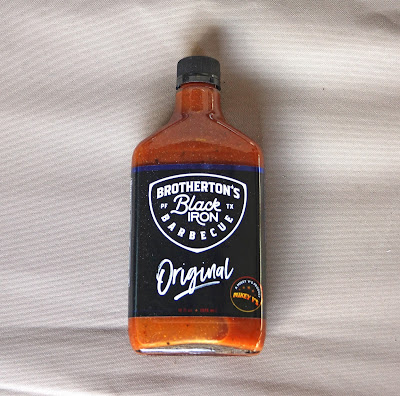 We will start with the rub ingredients which will be very easy. Salt Pepper (black and red) garlic and Carolina Reaper Peppers are the listed ingredients. Now Carolina Reaper Peppers are some of the hottest around but this rub uses them in restraint. An initial taste test reveals salt and pepper with the slightest hint of Reaper Pepper. It only registers a slight tick over the mild notch on the heat meter.
Brothertons Black Iron sauce has the usual suspect on their ingredient list. This is a tomato base sauce that has natural smoke flavoring in the mix. It is a fluid sauce that pours easily from the bottle. It smells very pleasant. It makes me hungry for the bbq to come. 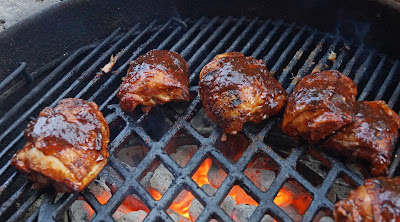 Chicken thighs are dusted with the rub. We cook the thighs using direct and indirect heat. We put some sauce on the last 4 minutes to experience the flavor to the utmost.  Drumroll Please: We had a very nice meal. Ms. Goofy said the rub was very good and she could taste the peppers with just the right amount of seasoning. I on the other hand could not taste the peppers and thought the rub to be on the salty side.  The sauce was very good but not spectacular. It was your run of the mill bbq sauce. I hate to say it was nothing to get excited about. Well in conclusion Micky V’s puts out some nice but not great rubs and bbq sauce. In my opnion.

Posted by Chilebrown at 2:13 PM

Apparently, it didn't break _your_ mouth. Bummer! I have ordered some maple bbq sauce from a favorite sugar bush in New York state. I'll let you know how it is. Have you thought of inventing your own bbq sauce using your favorite hot sauce and ingredients? You could probably make a fortune.

Zoomie, I wish it was that easy. We do have fun trying new products.