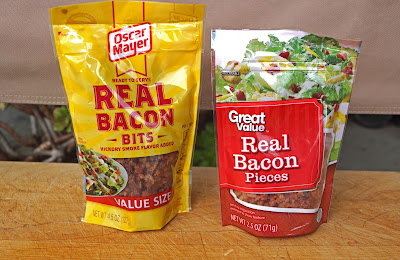 Our friend and fellow blogger BigDude posted a recipe that included real bacon bits.  Maybe it is because I do not do a lot of shopping but I never knew about this product. My experience with bacon bits was the crunchy fake products I enjoyed as a youth. These products are the real deal made with real bacon. I ventured to the local Wally=World and found both of these products side by side on the shelf. One was made by Oscar Meyer and calls itself Real Bacon Bits. The other is Real Bacon Pieces which was made by a house Wally World brand. The Wally-World brand was slightly cheaper but they both were inexpensive so I bought both. Let’s do a taste test. 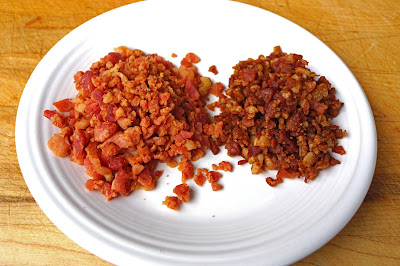 I read both ingredient lists and they both were very similar. In fact they were so close it leads me to believe the house brand was made by Oscar Meyer too. After a visual and taste inspection they are using different recipes if it is the same manufacture. We just sampled this right out of the box. Both tasted like bacon; Surprise, Surprise. They both had texture issues meaning they were not crisp and the Wally house brand was a little chewy. The flavors were both of beautiful bacon and I actually liked both products very much. I would use this product on salads, egg sandwiches, omelets, baked potatoes and possibly on ice cream. The Oscar Meyer brand may have been a slight more salty but this was not an issue.
I declare a tie in the Real Bacon v Real Bacon. Maybe a texture difference and a slight variance of salt but both products were equally good. They will never replace real bacon cooked by you but these are an inexpensive alternative.  Did I mention they are gluten free? Will wonders never cease?

Yay! I found a Kroger brand of the Real Bacon Bits here in the U.S. that has a hickory smoke flavour added and it is quite good too.
I can also buy it in Canada. I can't believe I used to eat the artificial crap.

Awesome! Thanks for the review on both brands! They also sell a big bag of this real bacon bits/pieces at Costco.

Patsy Irene, I used to really like the artificial crap as a child. When your in Canada would you pick me up a couple of Coffee Crisp candy bars?

Jayna Michelle, How about mini-doughnuts with bacon bits on top. I will buy a couple of dozen. Oh Yeah!!!!!!

Costco has a Giant Bag [of course] on the cheap, real tasty!

i remember those weird crunchy Bacobits! ate many as a youngster

ReDave, Good to know Costco has them. I do need to go by and pick up a 5 gallon jar of mayonnaise too.