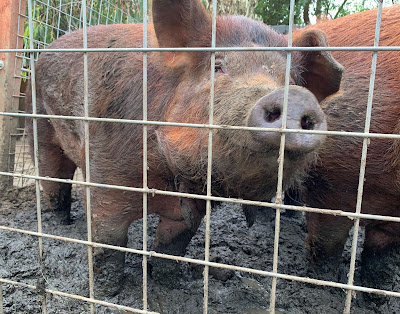 We embark on a Farm to Table adventure today. This journey involves the Red Wattle pig breed. I met a competition barbeque cook who raised Red Wattle pigs at his property which was located in Brentwood California. He had some meat for sale and said I could pick it up and see the pigs. Say no more. We arranged a time for a Meat Adventure rendezvous. 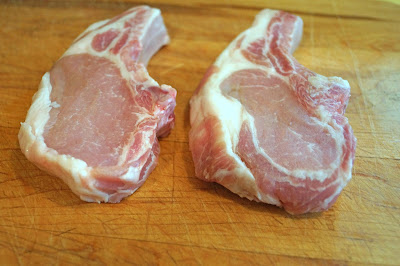 The property was located in a rural area of Brentwood. I would refer to this breeder as a 'Gentleman Farmer' who is really only getting started in the raising of the Red Wattle breed of pigs. He owns a pair of breeders which are very large and beautiful. The Red Wattle has an obvious red color and a noticeable red wattle hanging from its chin. They are considered a heritage breed which is an endangered species. The breeders are registered to insure blood lines.They actually seemed to be pretty smart coming to the fence when called. They are very large animals and I was quit content to be on the other side of the fence. 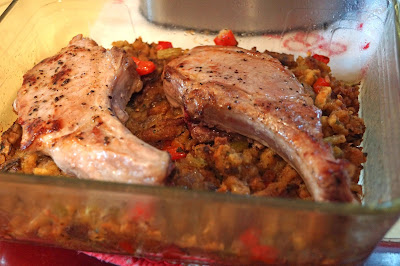 The breeder pair had a litter of pigs which were harvested. I bought some pork chops which we are cooking tonight. The pork is a pinkish color and has a very nice layer of fat surrounding. We browned the chops in a skillet and finished them in an oven on a bed of bread stuffing. The flavor was mild with a noticeable lusciousness that gave a very pleasant mouth feel to each and every bite. It had a Umami (I really do not like to use this word but it is appropriate ) type sensation where you craved the next bite. They were very tender. These were not your everyday supermarket variety of pork. We really enjoyed our meal.

This particular breeder is not set up to sell his meat commercially just yet. You can find more information and contact through Facebook "Farm to Table Group" "Red Barn Farms".
Posted by Chilebrown at 6:23 AM