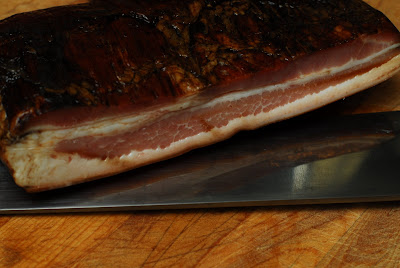 MAPLE
Tonight's performance will bring two performers to the stage. These two acts were discovered on a meat adventure to Reno. These two bellies of cured delight were found at a market called "Butcher Boy".We have a maple flavored bacon and a regular flavor to entertain. Both of these bacon's have a mysterious origin. It should be a good show. 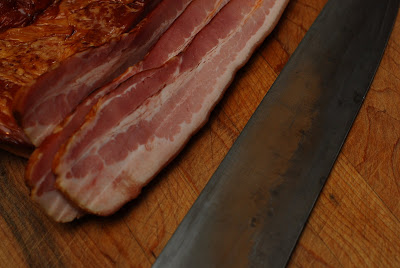 Why are these bacon's mysterious? We asked the butcher that was on duty, if he could tell us anything about these bacon's. He was not privileged to the bacon secrets and referred us to the manager. The manager was very nice and gave us a card referring us to the Meat manager. This must be some special secret bacon. Two e-mails later, No response from the meat manager. We will have to rely on an old fashioned method to review these cured slabs. We will rely on our taste buds. Dr. Biggles will assist in the tasting.

Both these bacon's are beautiful. The meat to fat ratio leans to the meaty side. There is only a faint odor of smoke. The one fantastic smell that grabs your attention is maple. Once this pack was open, a craving of pancakes immediately grabs your sensors. Both were fried in black iron. 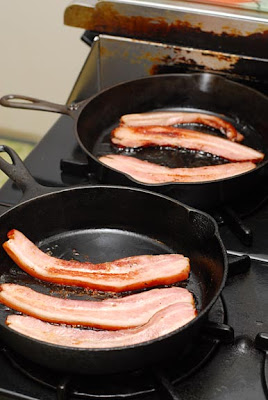 Maple, Maple, Maple is in the air and in our pores. This bacon needs to be cooked on a low heat because of the sugar content. Too high a heat will burn this rash of bacon. Both bacon's crisp up very nice. Dr. Biggles with camera in one hand and bacon in the other exclaimed his sensational enjoyment of these pork treats. This bacon could be the next Gold Standard of Bacon. The key is balance. The regular bacon had the right combination of sweet and salt. If there was any fault, it would be low smoke level. This point is only minor and is overlooked after tasting.

The maple bacon is over the top delicious. It is sweet and smokey. The meat had a wonderful chew to it. It has a dark color because of the sugar caramelization. Ms. Goofy wants pancakes. The whole house smells like maple. Now for the verdict. 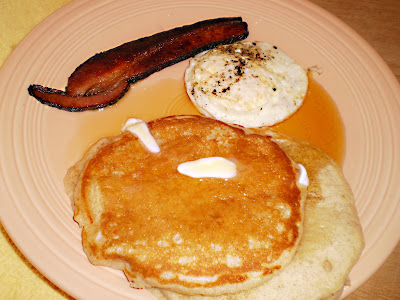 (except this one)
Posted by Chilebrown at 7:02 AM

Ooooo, My Beloved goes to Reno on business from time to time - next time, I'm going to ask him nicely to purchase some of this for us...

Ha ha! I like your picture best!
(Only because of the pancakes, Biggles. Sheesh.)

Zoomie, Tell Buzz, For some maple bacon today I will gladly pay him Tuesday. Call ahead for maple. It is not allways in stock. They are also located in Sparks.

Cookiecrumb. In defense of the Reverend,He would not set down the bacon. One handed shootin is tuff. Thanks!

These pictures made me haul a slab of Nueske's out of the freezer.

Didja know the Rogue Brew Pubs serve 4 slices of Nueske's as an appetizer?

Heh Greg, We were on the Ultimate Meat Adventure amd went to Rogue in Eugene Oregon. I saw the appetizer of 4 slices of Nueske bacon and Ms. Goofy had to do CPR. That translates to Crazy.Popalious,Reeehaa!
Does that make sense. Those four slice of bacon changed my life. Rogue is the bomb!