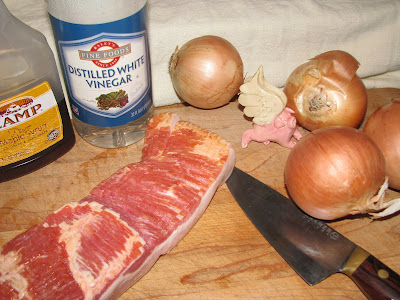 A previous tasting of 'Skillets' Bacon Jam brought out some not so positive reviews from the Mad Meat Genius 'Bacon Revue' board. I just so happen to be surfing by the The Bacon Show , when lo and behold, a recipe for Bacon Jam jumped into the Que of things to do. All the ingredients were on hand in the pantry. Why not? Let's give it a shot. Bacon, maple syrup and onions are slowly cooked to form a sweet savory accompaniment. Below, the recipe reprinted from The Bacon Show.

Bacon Jam
Cut bacon into quarter length strips. Place in dutch oven or heavy deep skillet, and render on the lowest heat possible until bacon is browned but not too crisp. Stir occasionally. About 1 hour.Remove bacon with slotted spoon, reserve in bowl.Place onions in bacon grease on lowest flame. Stirring every 15 minutes, keep going low and slow until onions are caramelized most of the way through and very sweet. About 3 to 5 hours.When you are getting close to removing the onions, add paprika, ground celery seed and ground cumin to pot, to taste. About a healthy pinch or three of each. Freshly crack some black pepper to taste, then remove onions with slotted spoon (taking some bacon grease with you), and place into a blender.Place reserved bacon into blender along with a tablespoon or three of apple cider vinegar, and about a 1/3 cup of real maple syrup. Blitz in blender until a rough puree forms. Keep it rustic unless you want a fine smooth texture.Taste, adjust syrup, salt, and other seasonings to taste. 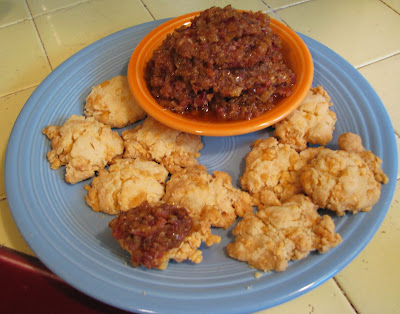 The first taste was served on some hme made cheddar cheese crackers. Well they actually turned out to be a cross between a cracker and a biscuit. Never the less the crackers were rich and cheesy on their own. The bacon jam was sweet and savory with little bites of bacon. The maple syrup just took the caramelized onion and made them scream with sweet sugary delight. The texture was rustic. Little crunches of bacon were a treat that was neat. Lets try it on a hamburger. To be more precise a bacon/burger. This bacon/ burger will have a dollop of bacon jam, home grown tomato and lettuce served on a dutch crunch roll. This burger was so good, it should be illegal. Did I just say that? Making home made bacon jam is a time commitment. The ingredients are few, but melt together for a sweet, savory treat. 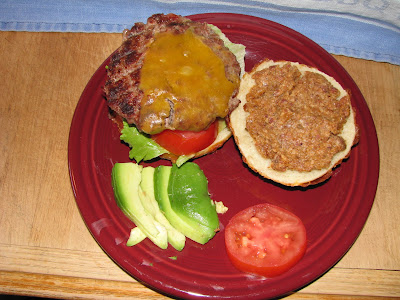 Posted by Chilebrown at 9:05 AM

this is a keeper, will be making this soon

I know I'm speaking heresy, but the onion part without the bacon sounded perfect all by itself - I might try that with less syrup and a bit more vinegar as a burger topping.

A Year on the Grill, This is some great stuff.

Zoomie, You are absolutely right. Recipes are meant to be guidelines. You do need to draw the line sometimes. Bacon Jam without Bacon? You silly girl!

Zoomie! Did you read his Blog Name?

Chilebrown, this sounds amazing. Thanks for the recipe... which is a starting point, right? I'd dick with the spice profile, but the technique is great.

In the Seattle bacon Jam bottle they mention Yeast extract as an ingrediant in the bacon sub-components). An easy way to get this is to get some "Vegemite" (Yea the austrailian, Men at work song stuff) and add it oin to compelte the mixture. And to prep the bacon I use a mincer to mince it first or get your butcher to mince it for you and the dice the result. A food processor might work but it dicey. (LOL @ me)