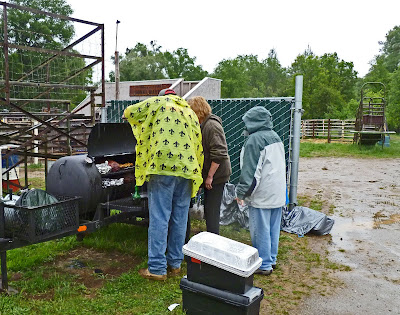 The 3rd Annual Smokin In The Oaks BBQ Championship could have been called 'The 3rd Annual Rainin In The Oaks Championship. Mother Nature never did let up on her down pour of rain. This did not stop twenty five brave and damp barbeque competition teams from cooking some great barbeque. Most teams were prepared with tents, canopy's, umbrellas and covers for their cooking area. The onslaught of rain did not dampen the competitive spirit. 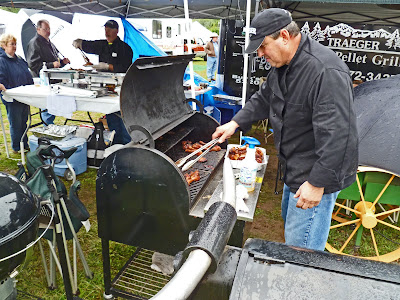 The judging tent was damp but dry. We huddled for warmth until the entries arrived. Once we began to taste the championship Q our spirits and bodies radiated with warmth. A couple of bites and the sun shined if only in our minds. 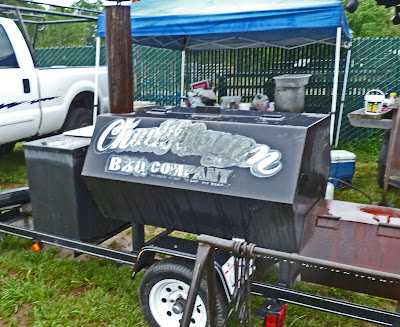 The public did show up but in little numbers and it was understandable. The ones that did were treated to some delicious barbeque. The Peoples Choice awards must and did go on. 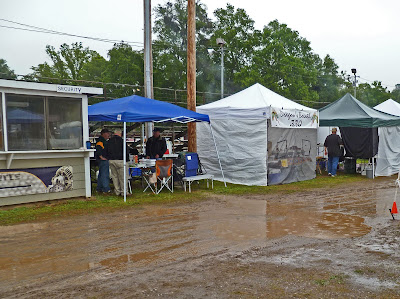 Congratulations to Harry Soo of 'Slap Yo Daddy' for putting another notch in his belt by winning the Grand Champion. Everybody that attended this event was a  winner. It just goes to show you that great barbeque will prevail even though Mother Nature did not cooperate.
Posted by Chilebrown at 8:33 AM

It was indeed a soggy day but I'm glad to hear the stalwarts were out there smokin' nonetheless!

So nice that it went on anyway. Yer all a bunch of sprinkled troopers.

Yeah! Was wondering if you two made it up, very nicely done.

Looks like it was almost a floating BBQ cook off.

Zoomie, I think most of the competitors are prepared for elements. I almost lost my tennis shoe to a mud puddle.

cookiecrumb, Last year the temperature was in the nineties.

meathenge, Next time we are draggin you along.

Greg, You can say that again.

Hay, in the nineties or in the mud, I'll tag along for sure!