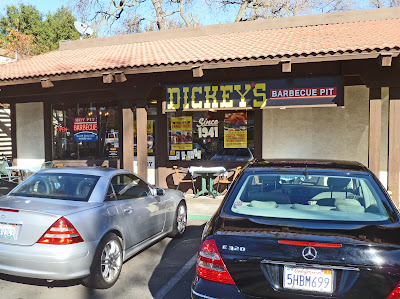 Dickey’s Barbeque pit was born in 1941 in Dallas Texas. Travis Dickey Sr. used to say; “Serve the best tastin’ barbecue imaginable, just the way people like it, and don’t make ‘em wait to long to get it. Today there are 280 locations in 43 states. It is amazing that I have never heard of this franchise until recently. In the name of BBQ research it will be our pleasure to venture to the Pleasant Hill Dickey’s and give them a try. 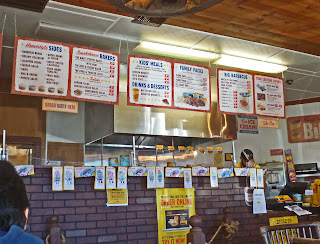 This Dickey’s is located in a small shopping strip. I have passed by this location many times without even noticing this establishment. We walk through the doors and are greeted by a large sign board listing the bbq and sides offerings. The walls have large pictures of maybe Travis Dicky himself. You place your order at the counter and your meal will be brought to your table. The menu is quit large. The four meats are offered with many combinations of sides. 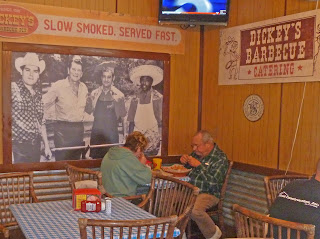 Ribs and brisket are two items I usually order my first visit to a new BBQ restaurant. These two items are a good indicator of quality in my book. The ribs were not ready. They were not sold out of ribs which sometimes will happen. They were not ready at 12:15 pm right smack in middle of the prime time lunch period. Talk about getting off on the wrong foot. Maybe everything else is so good that, ribs, the most popular BBQ item is not necessary to enjoy Dickey’s. Enough of my temper tantrum, brisket and pulled pork will have to do. 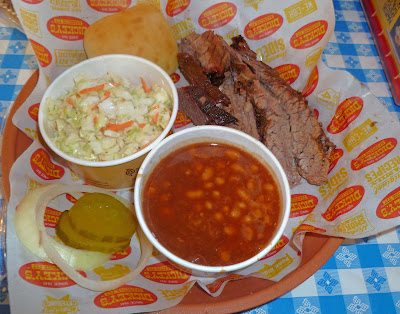 We received our meals very promptly. Travis Dickey Sr. would be proud. The sauces are served in a self-serve warming station. Original, sweet, and hot are the offerings. I took a little sample of each. These sauces were not horribly awful but I would compare the hot barbecue sauce to a packet of Taco Bell hot sauce. The 'Sweet' was very sweet and the 'Original' was most likey the original recipe and that may be the problem. It was time to sample the brisket.
This brisket was tender. It passed the pull test all too well. The texture and flavor was of pot roast. Not a pot roast that I would ever serve. I longed for a smoke ring or even a whiff of smoke. The bark was only a distant memory in my mind. I did see some scorch marks that may have been an artistic rendering of bark. Ms. Goofy had some pulled pork that did have a faint whiff of smoke flavor. I tried her pork for more disappointment. Sure it had a little smoke flavor but even the offered sauce could not resurrect this meat. Hopefully the sides will shine. 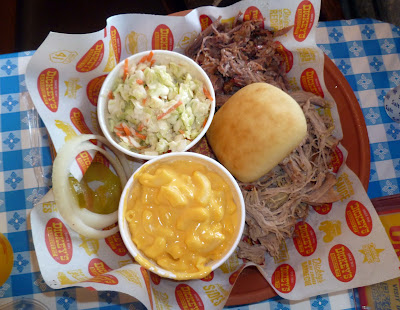 Barbequed beans that probably came straight from a can were very sweet with a hint of metallic. A decent home made roll and some Cole slaw was the highlight of my meal. Ms. Goofy liked her Mac & Cheese that posibly could of  have come out of a blue box
Dickey’s Barbecue Pit is a fast serving barbecue establishment. If you are in a hurry and do not care about flavor or having ribs, this may be the place for you. I did like the house made roll and the Cole slaw did not suck too much. There may be a reason why we have never heard of this place.We will not return.

No ribs? Beans from a can? Mac n cheese from the blue box? Sounds like three strikes to me.

Not much of a surprise to me Mr. Genius. Local BBQ is usually lacking. It is really a shame as this should be cuisine that Americans have down pat...

I guess you have to kiss a few frogs to find a princess.

Wow, not good! We have one near and I've never been. Thanks for the heads up. Sounds like a McRib Sandwich might be a better choice. :)

You know Lea Ann, Mc Rib is one of my guilty pleasures in life. It shouldn't be good. But, I like them...

'Twas the night before Christmas, when all through the house
Not a creature was stirring, not even a mouse;
The stockings were hung by the chimney with care,
In hopes that the 'Big Green Egg' soon would be there;

Kailyn, When they said no ribs, it took me a moment because I was shocked. I used to live by the blue box.

Greg, I ain't kissing no frogs.

Lea Ann, Congrats on your playoff berth. We will be watching and counting the Elway sightings.