Otaez is the name of a small town in . Otaez is also the name of a popular Mexican restaurant in . The original location in the Fruitvale district has been a popular hangout for locals and the “5-0” police officers. Otaez opened this sister restaurant in to expand their popularity. Sleek and modern is the new location. A full bar and spacious dining area awaits a new crowd of Otaez diners. The original Otaez was always crowded and it was nice to get a seat immediately at this new location. 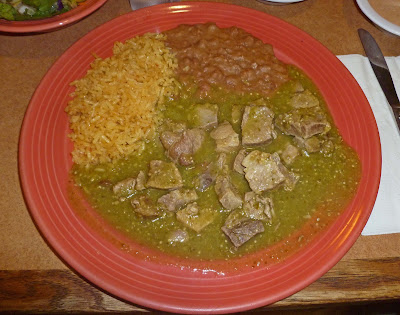 We were here to continue our search for the Ultimate Chile Verde. We placed our orders and sampled the two complimentary salsas. Pico de Gallo and a tomato and chile mix were the offerings. Both were mediocre and under seasoned. A splash of salt and possibly some heat was needed. A nice salad accompanied our lunch. It was topped with tortilla strips and our dressing came on the side as requested. Our entrees arrived very quickly even though we were dining at the peak of the lunch hour. 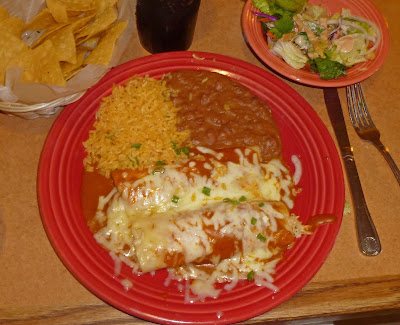 My large plate of chile verde arrived to the table steaming. This plate of green gold was accompanied by a basket of house made corn tortillas. Fresh tortillas are a plus in my book and they hit the mark. I dove into my plate of cubed pork and green chile gravy with gusto. The gravy/sauce was delicious. It had a little kick of heat from the fresh peppers. I want to venture that the heat was from Serrano peppers. This sauce was a good balance of tomatillas, peppers, cumin and cilantro. The cubed pork was a little chewy and not overly flavorful. The sauce made up for the extra gnawing and was sopped up with my yummy tortillas. Ms. Goofy had enchiladas and claimed mediocrity. 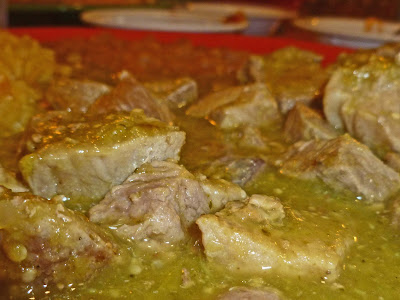 Otaez is a clean, modern, fast and inexpensive sister restaurant of the original. We enjoyed our lunch. The sauce of the chile verde was extraordinary. The fresh tortillas are comfort food that I crave. A bowl of sauce and tortillas would make me happy. Otaez is a nice restaurant but our quest for the Ultimate Chile Verde will continue.

The search continues. It looks like you are having fun along the way.

Greg, Fun is what it is all about.

I'm always looking for the ultimate Chili Verde that I can make at home. I really like your restaurant reviews ChileB.

The quest for the best Mexican is second only to my quest for perfect BBQ. This looks like a great field trip. I can taste the green gold from here...

Lee Ann, I believe that I make a pretty darn good bowl of verde at home. Here in the Bay Area we have so many Mexican restaurants that we will never get to them all. It sure is fun trying.

panthers76, My BBQ quest is looking for the ultimate burnt ends. This is a difficult quest on the West Coast.