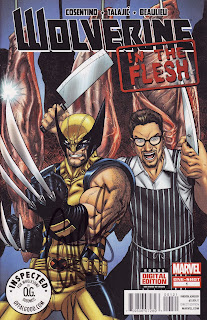 Chris Cosentino; celebrity chef, salumi producer, hot sauce maker, bicycle racer and now comic book writer. Chris Cosentino has teamed up with Marvel Comics and wrote his first comic book. Yours truly has obtained a first edition autographed copy.
Our story begins at “The Annual Urban Outlaw Cycle-Cross Cross-Dress Bike Race’. Two dead bodies have been run over by the ‘Cross Dress” racers. These bodies are not only dead but have been butchered literally. The police have no choice but to bring in celebrity chef Chris Cosentino to help identify the butcher/murderer. Chris and ‘Super Hero Wolverine” team up to solve this crime. The story goes on from this morbid but colorful beginning.
I have not read comics since my ‘R. Crumb’ underground comic days. This was a fun read that was a little dark but humorous. Meat and comics are a great mix. Chris Cosentino you are a ‘Super Hero’ in my book.

Interesting. When I saw the title, I thought one of your many meat purveyors was giving Bazooka Joe style comics with your ground round. I see a 1st Edition Adventures of Chilebrown with his faithful sidekick Ms. Goofy driving to KCBS competitions in the ticked out Racing Honda.

ThreeDogsBBQ, Sometimes my life is a Bazooka cartoon. I would not have it any other way.