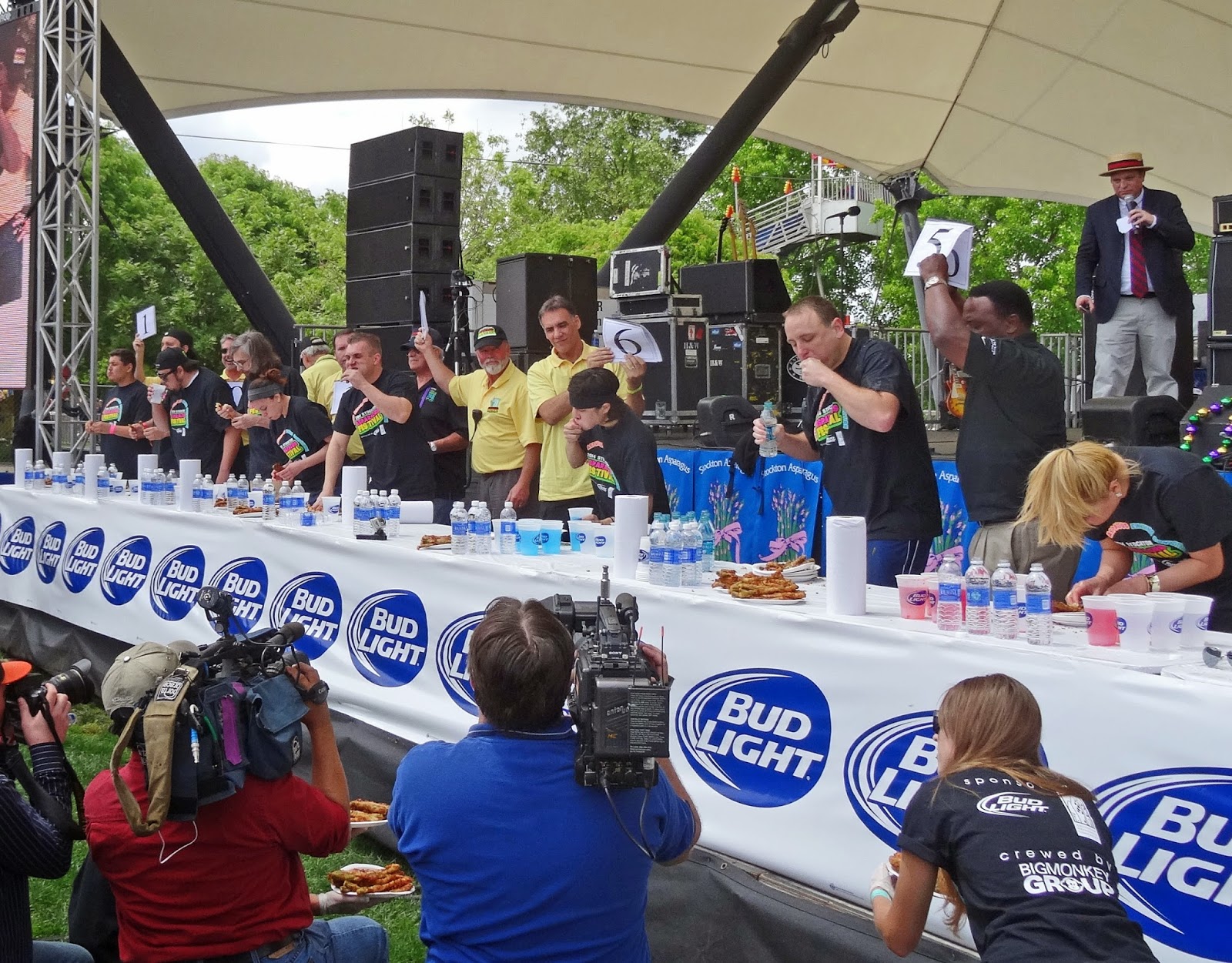 Twelve pounds eight and three quarter ounces of deep fried asparagus was consumed in 10 minutes to create a new worlds record. Joey 'Jaws' Chestnut put on a clinic in the art of mass consumption. We donned our asparagus shirts and arrived early to stake our stage site viewing area. This event was special to us because our friend Jon Davis, a brother in the bbq community, was making his inaugural attempt at this prestigious sport of mass eating. 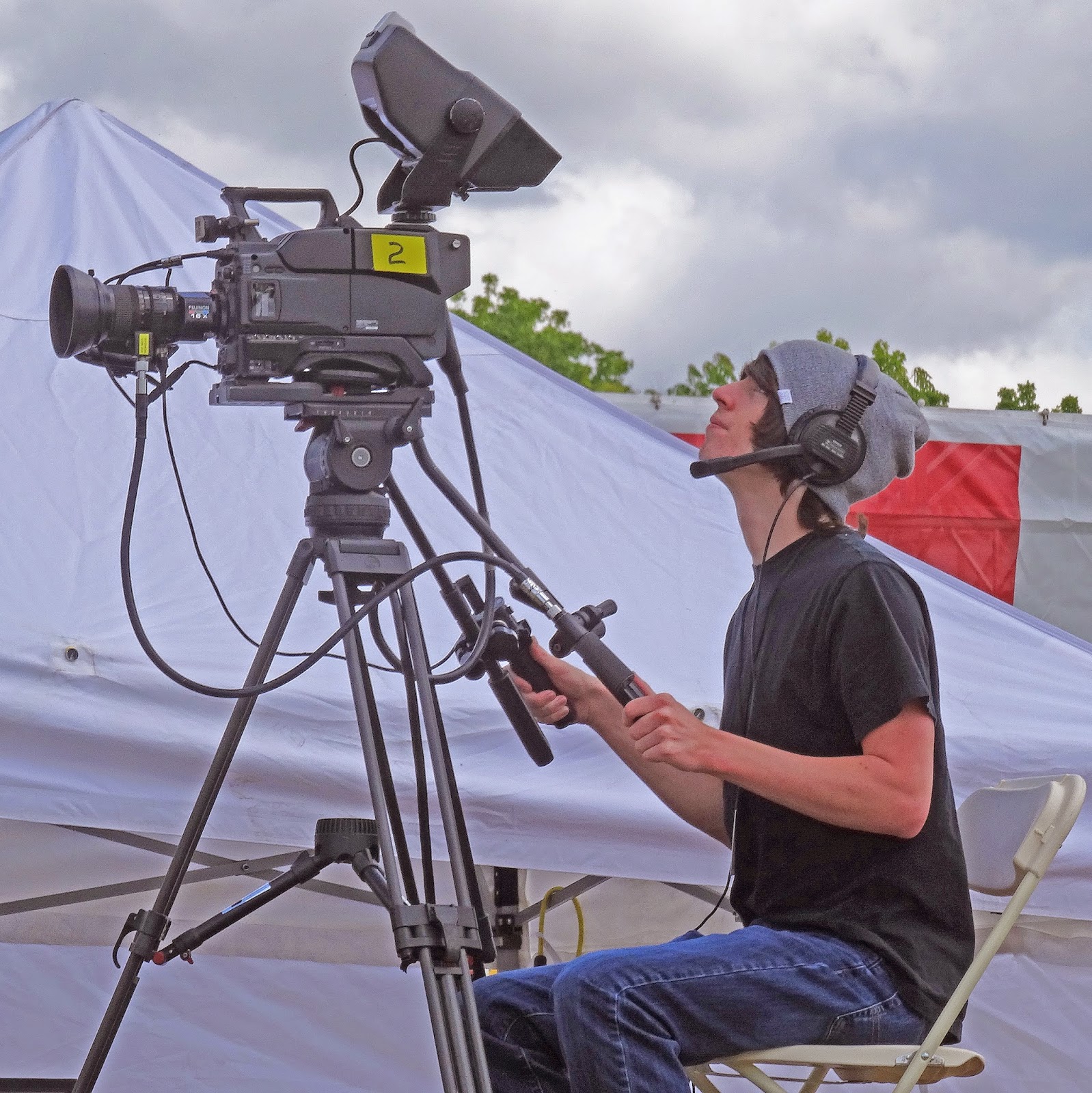 Jon had his own fan club. It consisted of judges, professional bbq cookers, friends and family. There were signs made up to encourage Jon. We were only a few in this large crowd of Chestnut supporters but we did not lack in enthusiasm. The clouds in the sky created an ominous, dark mood leading up to the start. The announcer begun to whip the crowd into a frenzy with his humorous and snappy patter. The sky's parted and the sun shined brightly onto this stage of mass food consumption. Let the games begin. 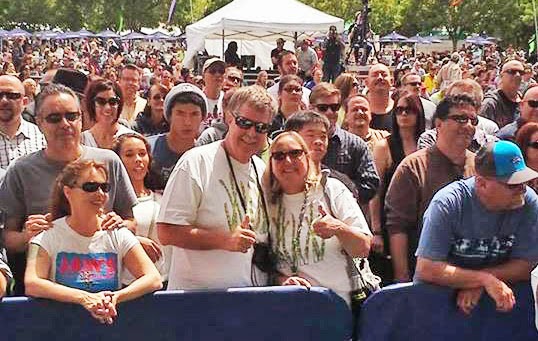 Matt 'Megatoad' Stony took an early lead over the champion. Joey was using his trademark shimmy shake method. Jon dove into his first plate of Asparagus. The crowd was going wild. Ms. Goofy almost jumped onto the stage with her enthusiasm. The five minute mark arrived; Joey and Matt were neck and neck. They seemed to encourage each other to smash the existing record. Jon finished his first plate and started his second. Jon had the determination but his pace was no match with the professionals. 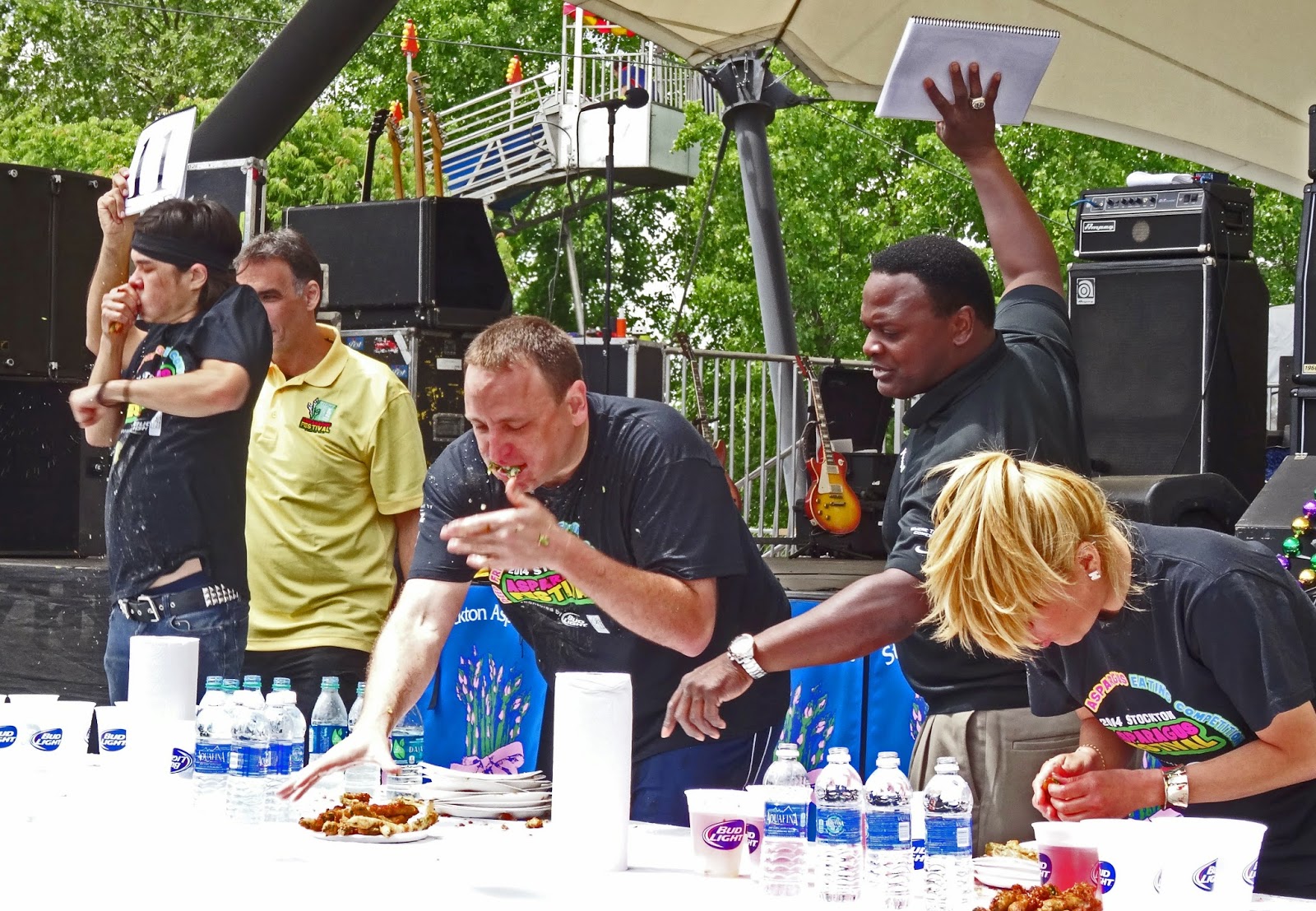 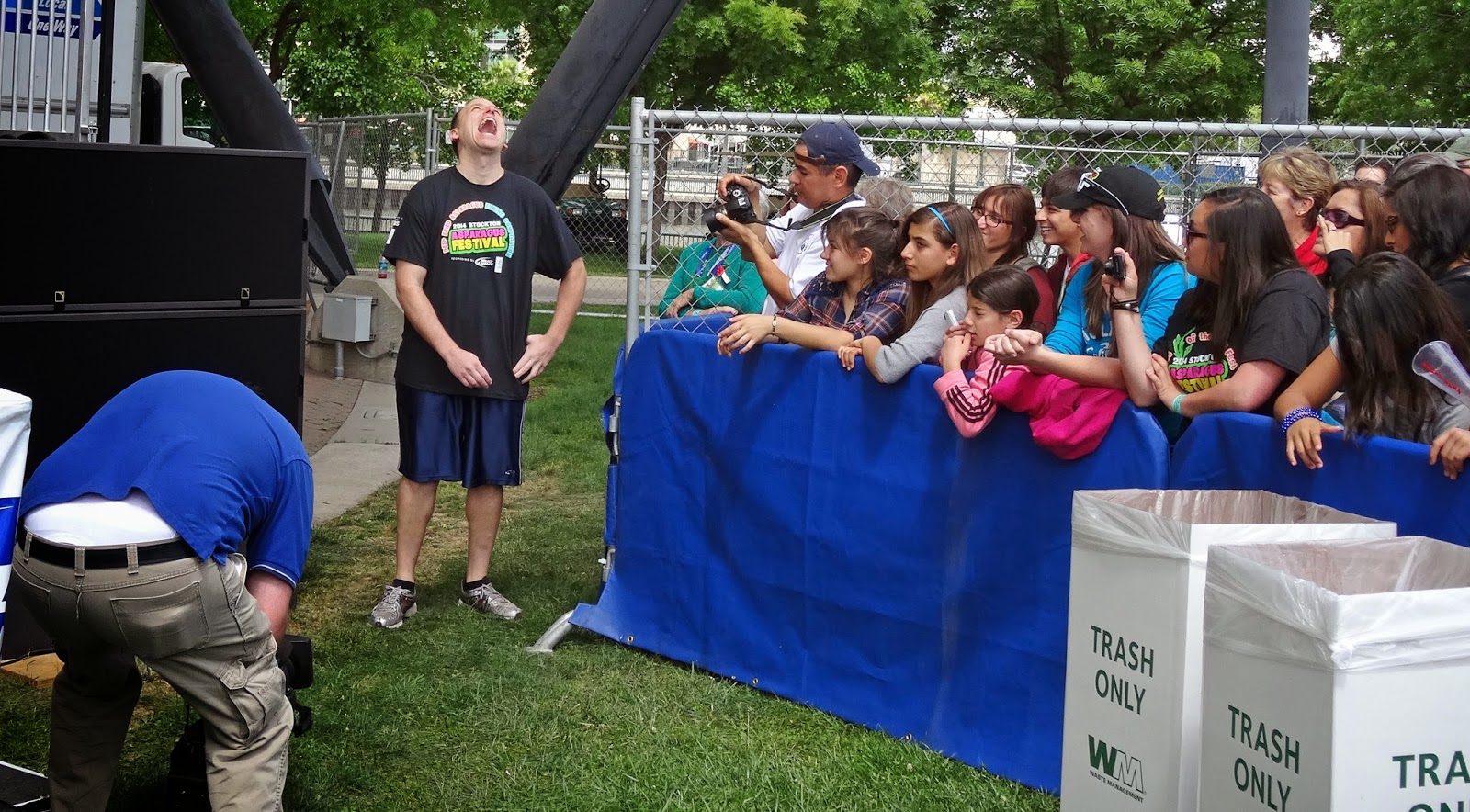 The last seconds of the match were counted down. Matt and Joey seemed tied. Joey and other professionals have a technique called 'Chipmunking" This is when they shove and cram as much food into their mouth and hold it to be eaten later. This must be done before the final bell. It must all be eventually swallowed. Joey is a champion. He beat Matt by only several ounces. They did smash the previous worlds record by almost 4 pounds 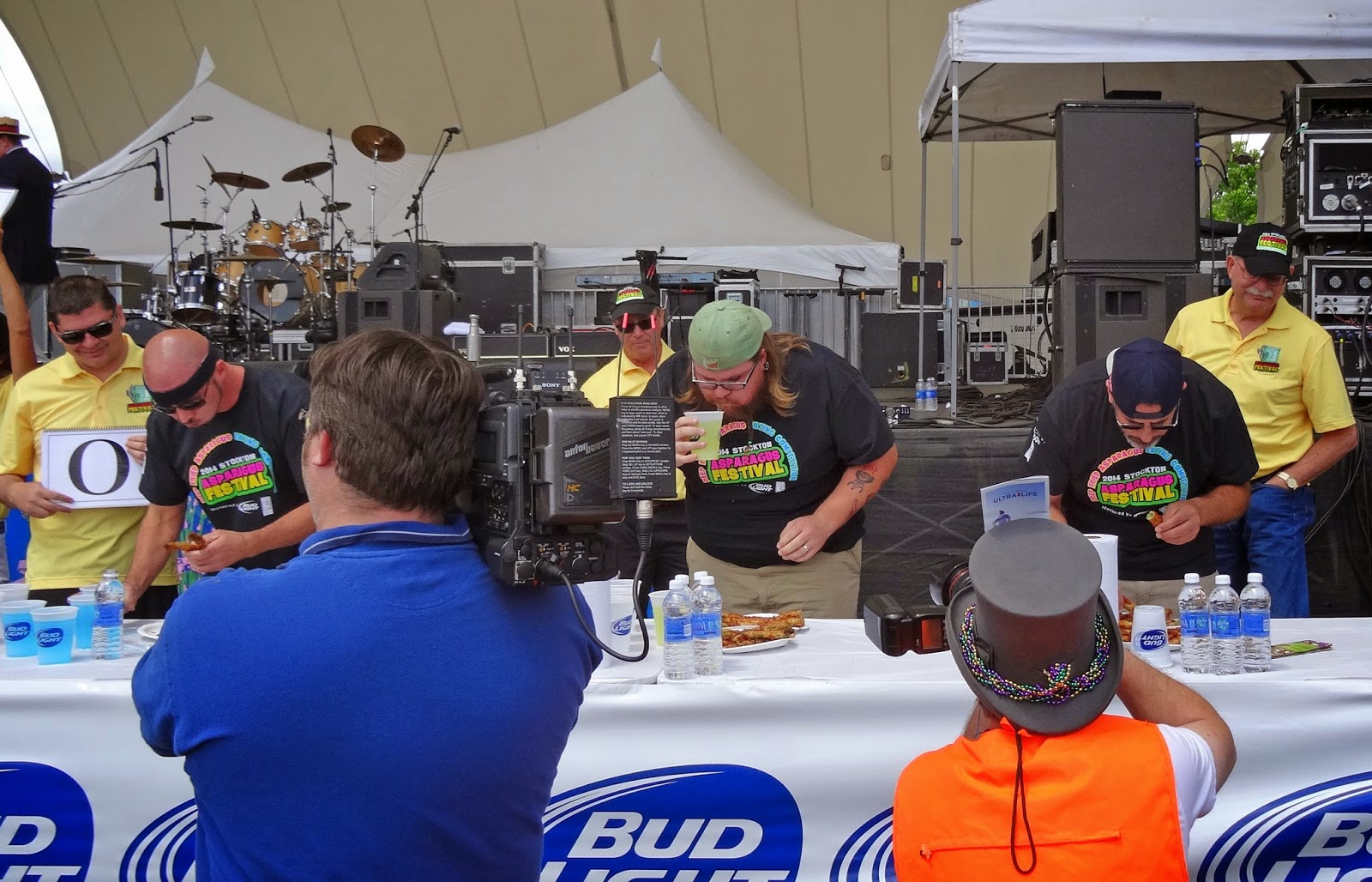 This was a contest that will go down in gastronomical history. We had front row seats to witness this extravaganza.. Our friend Jon ate a respectable 2 pounds. I do not think this trencherman will ever hit the stage but we sure have fun watching this event. Posted by Chilebrown at 8:12 AM

That is a lot of dietary fiber...

Great review! Thanks for being such huge fans! I really appreciate everyone that came out to support me in this crazy challenge. It was a ton of fun, and im happy with my 2lb finish!

Three Dogs BBQ, You can say that again.

JON DAVIS, We had way too much fun cheering and watching you, Joey and Matt. You are definitely braver than I. Good times!!!!!!!!!!!

Chilebrown, you have a whole year to train. I think you are up to the task...

I do not think so. This is a job for professionals. I can eat 12 pounds but it will take several days.