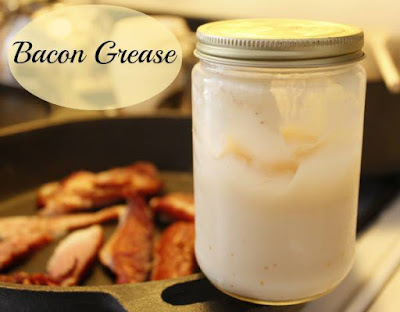 This ad was found on Craigslist. I could not resist sharing this with you. I remember my mom saving bacon grease in a designated container kept in the refrigerator. I did not take him up on his offer but I did get a nice chuckle from his ad.

I'm giving away a jar of bacon grease / bacon fat, from hardwood smoked bacon. I make sure to fry it at low or medium heat so as not to burn the grease. It's a beautiful cream color.

It's a great cooking ingredient, but we don't use it in our kitchen. "Bacon butter" or "bacon drippings" are classic with vegetables or Southern cuisine. Many say "You can't fry a potato, season green beans or mustard greens without it."

Traditionally, bacon grease is saved in British and southern U.S. cuisine, and used as a base for cooking and as an all-purpose flavouring.

Pick up this jar only in-person - I will not respond to texts or large cash offers.

Location: on Sage Sparrow Circle in southeast Vacaville 95687 (near Alamo Drive/Leisure Town Rd.)
Posted by Chilebrown at 6:58 AM

We always have a container of bacon grease in the fridge but never thought of offering it to someone.

Big Dude, We also have a container but I would never give it away or sell it for that matter. Priceless for sure.

Grounds keeper Willie from The Simpson's. You got any grease woman? Then grease me up!!:)

Greg, I just looked up the video. Now thats funny.