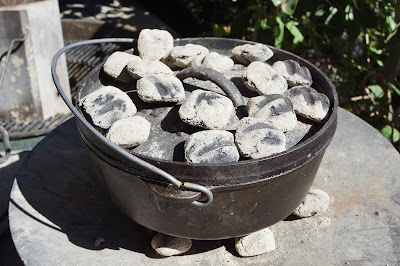 We have a lot of fun cooking in the Dutch oven. It is the perfect vessel to cook dinner and not warm up the kitchen on a hot summer day. Today we are making my version of Dutch Oven Cordon Bleu. This is not my original idea and will have Chilebrown twists that deviate from the original recipe. This recipe consists of seasoned chicken, Yukon gold potatoes, Canadian bacon (My friend Jon, gave me some of his home cured Canadian Bacon), red onions that are topped with a cheese and breadcrumb mixture. It is all baked in a Dutch oven. What fun. 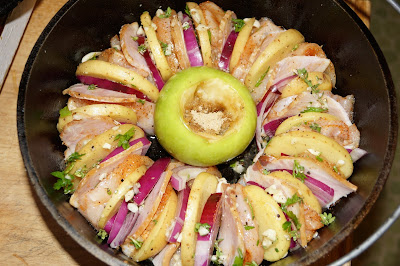 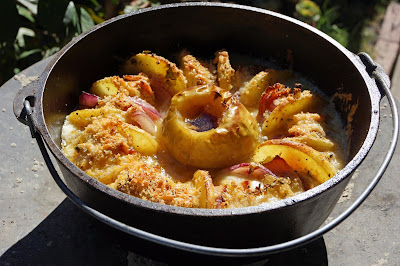 Oil the Dutch oven to prevent sticking. I marinated the potato slices in olive oil, chopped garlic and salt & pepper. The chicken medallions were seasoned with bbq rub. (Your choice). The next step is to create a circle of ingredients around the interior of the Dutch Oven. Start with the potato, then the chicken, Canadian Bacon, onion slice and repeat to create a circle. Season with more salt & pepper if desired. I then placed in the center a cored apple with the bottom intact and put 2 tablespoons of brown sugar. Pretty fancy don’t you think? It is time to cook.

We used 9 charcoals on the bottom and 15 charcoals on the top for a 20 minute cook or until the internal temperature of the chicken reaches 165 degrees. Then I combine the cheese and breadcrumbs. They are sprinkled on top of the mixture and baked for another 10 minutes or browned. 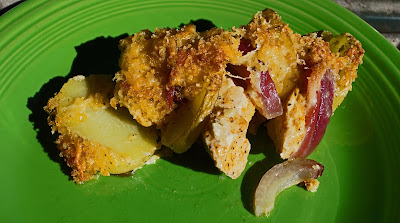 Winner, Winner, Cordon Blue dinner was a success. This is a rich and decadent savory dish. The homemade Canadian bacon took on a crispness that was over the top yummy. The cheese and breadcrumb mixture really adds a decadent touch. The next time it is too hot to cook in the kitchen give this recipe a try.

Looks delicious and very creative. I need to get my Dutch oven back into service.

Big Dude, I cannot take credit for the creativity but I can sure vouch for the yumminess factor. Your Dutch ovens are calling you.

That looks great. I can taste it from here.

Beautiful! The apple is the money!

Three Dogs BBQ, Thanks, I hope your competitions are going well.

Greg, Backed apple with brown sugar adds a dessert in the middle of your dinner. What a dilemma. Which should I eat first; dinner or dessert?