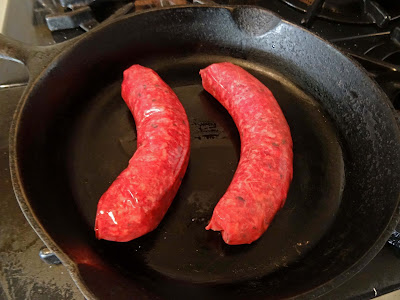 "There is nothing wrong with your television set. Do not attempt to adjust the picture"

This is one beet red sausage; literally. While strolling through the Ferry Plaza Farmers market this sausage drew me in. It was sold by "Salt Pt  Butchery and Provisions" a non traditional meat purveyor. They sell at pop-up events, 'Meat Share' program, and here at the farmers market. The ingredients are pork, basil, shallots and beets which are fairly obvious by the bright red color. I want to mention the price because it was on the high side. These two sausages combined weighed twelve ounces and cost ten dollars. I believe we shall have some sausage pizza tonight. 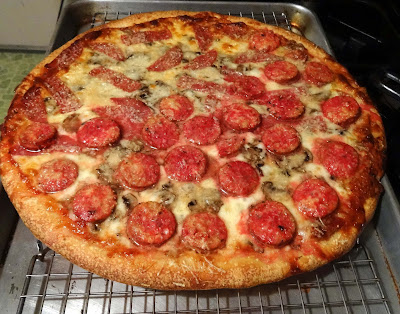 We browned the sausage in our trusty black iron pan. Once it was cooled we sliced and put it on a pre-made bake pizza. A short trip into the oven and we were ready to eat. The sausage was okay. It had a earthy sweetness from the beets. It could of used a little more seasoning because this sausage was also on the bland side. The basil and shallots were a little lost in this mix. It was fun to experiment with our sausage find. We now return control of your television set to you.

Salt Pt. Butchery and Provisons
Posted by Chilebrown at 6:13 AM

Those look like Red Hots from NY. I still have spots in my retina. If the spice balance would have been better, would it have worked?

Three Dogs BBQ, That is an interesting question. I may do some experimenting on my own with beet sausage.