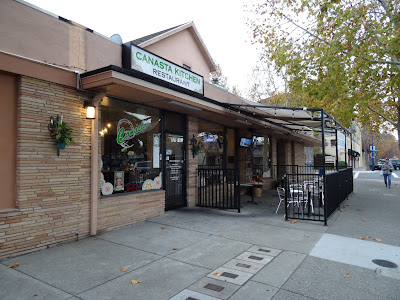 The quest to find the best Chileverde dish continues. In fact it was not even on the menu today at Canasta Kitchen Restaurant. We have been taking advantage of the discounted prices offered by Groupon. We found a coupon for Canasta Kitchen Restaurant and decided to give it a try. We bundled up on this chilly day and traveled to Concord California for upscale Mexican food. 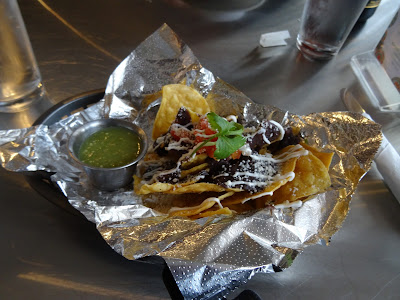 We walked into an almost empty dining area to a chilly bare metal table. Luckily the waiter had a warming personality. He greeted us and cheerfully told us about the restaurant and offered some menu suggestions. The menu was small and had limited but flavorful sounding selections. There were enchiladas, empanadas that our waiter recommended, huaraches, chile rellenos and street tacos that were made with rib-eye steak. They serve breakfast, lunch and dinner with other Latin influenced menu items. I did make the observation that the prices were on the high side. 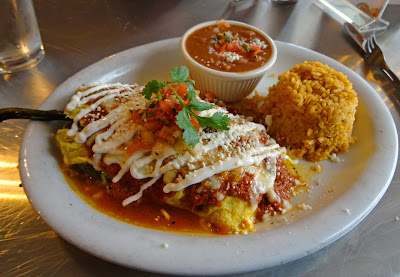 We placed our order and immediately received a complimentary serving of a flavorful tortilla soup and a small basket of tortillas chips that had a spattering of black bean puree and a side of tart tomatillas salsa. The tomatilla salsa did not have any discernable heat. We were excited for our entrees because the tortillas soup was very flavorful and warming on this chilly day. Our entrees arrived. The kitchen took pride in their plating. These were fantastic picture taking opportunity plates.

I had chile relleno with rice and beans. I do admit this was one pretty plate. One does eat with their eyes first. This pasilla pepper was filled with carne asada and vegetables. It was pleasant and filling. The beans were lackluster and the rice bland. My overall feeling was this dish was lacking in any heat and spicy seasoning. It was bland. Ms. Goofy had enchiladas with the combinations of red sauce, green sauce and fillings of chicken and beef. She also had a pretty plate but struck out in the seasoning and spice department. 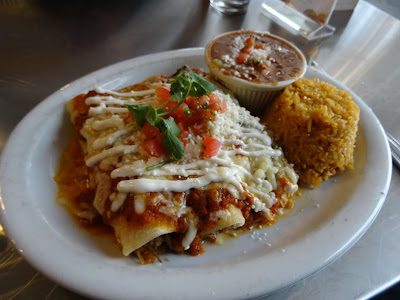 Canasta Kitchen Restaurant takes care in their food presentation and customer service. Our waiter was pleasant and helpful. Our plates could have come out of a food magazine. These food offerings did not excite in the flavor department. The complimentary appetizer of tortilla soup was the highlight of our meal. Canasta Kitchen charges a premium price for these pretty plates and with all the other choices in the Bay Area for Mexican food we most likely will not return.

Posted by Chilebrown at 7:26 AM

I haven't been in awhile but you should check out El Aguila in Pleasant Hill- similar approach, very good food, and they have chile verde. Pic here:

The chile relleno too.

Aaron, That sounds good. We will have to give it a try.