We were watching the NBA finals last night and it is possible the commercials lasted longer than the game. A couple of commercials that caught my eye were two fast food giants bacon topped burgers. Wendy’s has the ‘Baconator’ while Burger King has the ‘Bacon King’. Today we are doing a side by side taste off. May the better bacon burger win.

Luckily Wendy’s and Burger King are located right next door to each other. We bought both and I would like to say they both were freakishly fast in completing the order. They had to be pre-made or they have a device to tell them I was on the way. Here are the advertised facts about each burger. 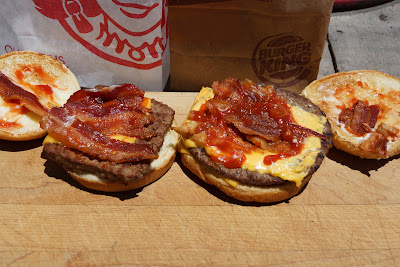 “Thick-cut Applewood Smoked Bacon, two 1/4 lb* patties and even more bacon for a grand total of six (6) fresh-cooked, never microwaved strips. Topped off with mayo, ketchup and cheese on a premium toasted bun to hold the meaty masterpiece together.”
950 calories
Cost:        $5.45 with tax

Both these burgers are very similar in cost and ingredients. Wendy’s asked me if I wanted a single or a double. I opted for the single so I am not sure if the calorie count is the same because the advertisement says two patties. The million dollar question is how did they taste and is one superior?

We have mixed results and possibly a tie in our burger battle. Ms. Goofy liked the Baconator from Wendy’s. She like the softer bun and thought the burger meat and bacon was better. I preferred the Bacon King. The bacon on the Bacon King was crisper and I thought the cheese was superior. We both agreed that both of these burgers did not look anything like the advertisements. The Wendy’s bacon seemed limp and lackluster in my opinion. The Bacon King’s bacon was crisper but bacon flavor was just not popping. Bacon was supposed to be the star of this show but only played a supporting role  with the condiments making both of these burger mediocre at best. Both Wendy’s and Burger King know how to push my bacon buttons by their media blitzes. They got me to come in.

We really like to do taste tests at home. I often want to go into a fast food place and demand one that looks like the one on TV :-)

Big Dude, The old bait and switch game seems to draw me in. I would like to demand the burger on T.V. but around here there is a definite language barrier between the order takers and myself. They can take the order and give correct change but deviate from that and English is not the first language..

Appearance score for the Baconator are well higher than the King, IMO. The Baconator looks taller and the bun shines invitingly while the King looks crumpled and lifeless. Also, a pet peeve of mine is how a sandwich is assembled makes a difference. The worker who assembled the Baconator gets the thumbs up from me for carefully placing the bacon in such a way as to guaranty a bit of bacon in every bite where as the worker who assembled the King simply grabbed a clump of bacon and placed it in the center which results in numerous baconless bites. I don't know if the King worker was instructed to assamble it that way or if he/she was just lazy. I'd like to see chilebrown create and publish his own definitive version of a Baconator/Bacon King. I'm betting it would be glorious!!

Scott, Spoken like a true certified Kansas City Barbeque Society Master Judge that I admire and respect. I agree the Baconator is a better looker and Ms. Goofy liked it better. I went for taste and the Bacon King got my vote. You know that taste trumps appearance in the weighting of scores. They both were mediocre at best. We will debate this some more when hopefully we both are at the Kool table at Van Ruitten or Santa Clara. See you soon.

I think you should break the tie by trying the Arby's smoked pork belly offering...