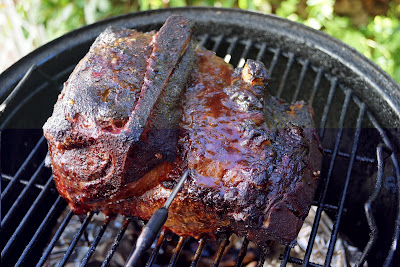 We had a hankering for some pulled pork this cold and breezy Sunday. The day before I went to our local farmers market and picked up a Berkshire Pork Roast to achieve this culinary urge for pulled pork. This special roast was picked up from the good people of Hanson Farms. They raise the Berkshire breed of pig for market. This roast weighed in at 5 pounds and cost 12 dollars a pound. Berkshire breed pig is known for its elegant round and buttery flavor that melts in your mouth. It is elegant and has a slight beefy flavor. This should be very special. 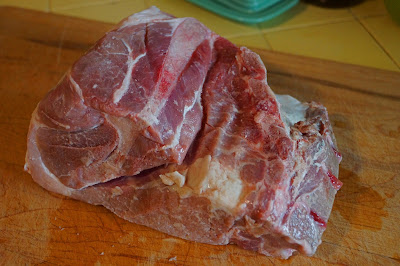 We defrosted the roast in several water baths to reveal the true shape of the roast. Something was very odd. If you look at the image above you can see what I mean. The shoulder roast has a bone included which is called the blade bone. This is industry standard and expected unless sold as boneless. What is odd was another bone that you can see on the very right of this image. I am not sure the name of this bone but it was odd for a shoulder roast and contributed to 15-20 percent waste. You will also notice a split down the center of the roast which I am going to say is just sloppy butchering. I believe  Hanson Farms is not directly responsible. They send out their product to Wolfpack Meats University Nevada Reno. We have had problems in the past from poor butchering from this teaching college. We have also tried to contact them in the past with questions with no response. 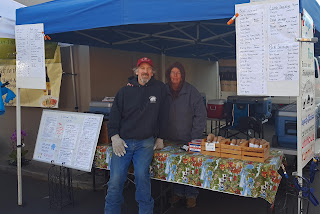 We cooked our roast in the smoker using traditional rubs, techniques and cooking procedures. The flavor of this roast was spectacular. Berkshire pork is something to be experienced. Here is the rub. the texture was off. This pork was chewy, a little tough, and just did not have the lusciousness associated with this breed. Was this  cook (myself) error in cooking techniques. This is very possible because this breed is very different than your Wallyworld pork shoulder roast.I have given up on any products butchered by Wolfpack Meats because they are consistently terrible.  I did reach out to the Hansons by e-mail with no response. I do not fault the Hansons product because they I have bought meat in the past with spectacular results. I will definitely have to do some more research on cooking heritage breed pork. It is time to move on because we have more Meat Adventures planned later this week.

Mr Brown I must confess I have let you down in my travels of the wilderness. I only remember because of the jarring statement that another business is having their fine product destroyed by the Wolfpack. I have heard rumors that Bently Ranch Meats no longer uses the blind college students at Wolf Pack Meats and have opened a storefront operation with sited butchers in there employ. I will investigate next time I feel the need to be with my native people. GWH OUT.

greatwhite hunter, How does an instructor allow students to put out products like this? This is totally unacceptable. Wolfpack Meats should be ashamed.

(Sighted) Damned speech to text. Mr Brown also there maybe a new butcher shop that goes by the name of Sanchez Ranch which I may or may not of forgot to talk about. I have taken a nap since my last post. Going to get a cup of coffee before I fall asleep again. GWH OUT

greatwhite hunter, I just Googled Sanchez Ranch and their tag line; Quality. Consistency. Commitment. Excellence. I hope they are not using Wolf Pack.

The meat looks good but I'd be unhappy paying $12/lb for extra bone.

Big Dude, That bone cost me aprox 12 dollars. I was not very happy either.