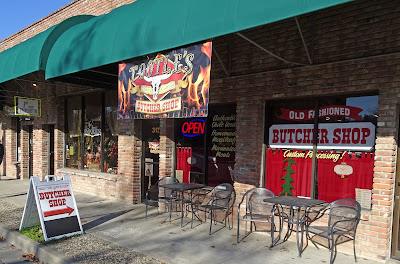 We do not make it up to Marysville California that often. We just so happened to be in the neighborhood on another errand and Tootle's Butcher Shop was right around the corner. The last Meat Adventure we visited Tootle's we were told the Chileverde was a must have item but they were sold out because of the popularity. When we entered Tootle's the clerk asked us what we desired and I promptly replied; Chileverde? We were in luck and it was available. I was a little surprised that it was not cooked but sold as bulk raw Chileverde ingredients. We bought several pounds for tonight's dinner. 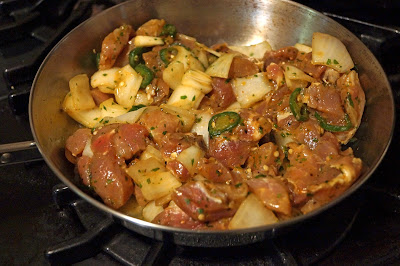 We received basic instructions on how to cook our Chileverde. Heat up a little oil in a pan and brown the ingredients over a high heat. When a little color is achieved turn down the heat to a simmer and cover the pan. Cook until the vegetables have softened and the meat is tender. We did add a little salsa for a little extra moisture. This whole process took about 25 minutes. It was suggested to serve over rice. 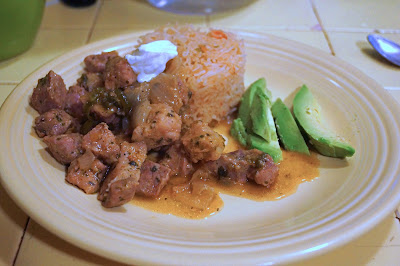 This rendering of Chileverde hit the spot. It had very nice seasoning and had a little pepper flavor from the jalapenos. We do not know the whole ingredient list but I did see onions and sliced jalapenos. The big plus was how easy and convenient it was to make this dish. The pork was tender and satisfying. The next time we are in Marysville, Tootle's Chileverde is on the list.

Posted by Chilebrown at 6:52 AM