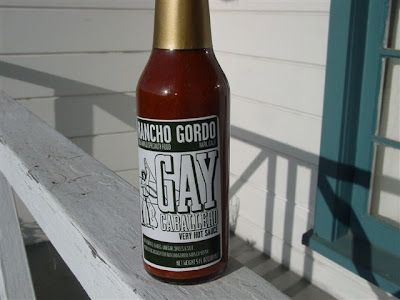 The In-laws were over for a visit this weekend. We wanted to bring them someplace special. We loaded up the Chilemobile and headed to the City. We brought them to "The Ferry Plaza" in San Francisco, California. The 'Ferry Plaza' is a World Class Food Destination. There is a farmers market, food shops, restaurants, and anything your heart desires that is food related. It is a Disneyland for Foodies. Ms. Goofy and I frequent the market at least once a month. There is so much to see and so much to buy! We arrived at the market at 9:00am. It was already getting pretty crowded. We walked by the Rancho Gordo booth and a Hot Sauce grabbed my eye.
I am no stranger to Hot Sauces. I grow numerous varieties of Peppers. This year, I will be attempting to grow the Bhut Jolokia. It is a pepper from India that is 5 times hotter than a Habanero. I am not sure what I am going to do with it. I may make pepper spray to repel elephants. Ms. Goofy and I have attended several Hot Sauce Conventions. I have to have a chile fix daily. When I see a unusual or different sauce, I will have to try it. Rancho Gordo makes quality products so this purchase was a no-brainer. 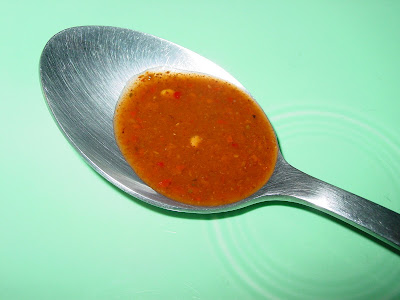 The first thing I noticed about this sauce was that it had separated. A quick shake of the bottle took care of this. I poured some sauce in a spoon and gave it a quick smell. I smelled cinnamon and cloves. The sauce was not very thick. You could see chile pulp and seeds. I gave it a taste. I tasted cinnamon and cloves with just a little heat.(My heat tolerance is pretty high. So a little heat probably would register medium for a novice.)The bottle lists: Chiles, Vinegar,Spices and Salt. The Vinegar taste was faint. I would guess there might have been a little cumin in there somewhere. Rancho Gordo's web site says this sauce is made from the deArbol chile.
I liked this sauce. It was a little unique because of the cinnamon and clove taste. The heat level was low to medium. I had some with some chicken and rice. It complemented my meal. I will purchase this sauce again. 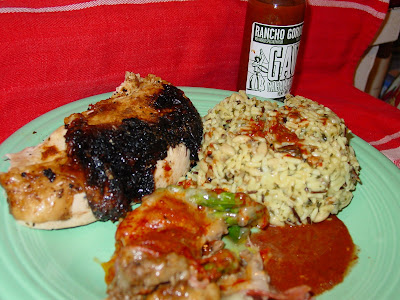 Posted by Chilebrown at 8:40 PM

We need to go find Steve of Rancho G. and buy him some lunch. MmMMm, lunch.