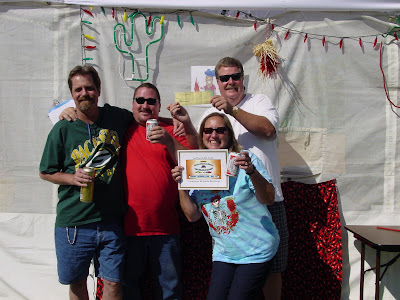 Mark your calendars for September 6. This is the date of the Rodeo Chili Cook off. I will be there defending our First Place title from last year. It is a Chili Cook off and Car Show. It will be held at the 'Lefty Gomez' field in Rodeo, California. Last year our team made a Tri-Tip Chili. It was voted as the crowd favorite. We had a lot of stiff competition. The field consisted of 12 other teams. The local church, fire department and a local politician were present. We had to prepare a 5 gallon pot of chili in 4 hours. Everything had to be prepared on site. We had to adhere to all Health and Safety codes. It was a little nerve racking at first. Once we had everything set up and cooking, the nerves settled. The 12 ounce cans of liquid refreshment might of helped too.

Our chili was done in plenty of time. We just had to wait for the 12 noon starting gun. A couple of booths down was vacant until the last hour. It was the booth for our local politician. I will not mention his name to spare the embarrassment. He came in with a crew who were bringing in boxes of material. After a little investigation we found out what was in the box. It was large cans of Nalley's Chili. The nerve of this fake to try to pass off canned chili. Well he was outed and disqualified. I wonder if this is a statement of all politicians. The gun sounded and the crowd surged. Our Chili was gone in less than an hour. We could relax until the votes were tallied. At the end we were victorious. It was the end of a good day! 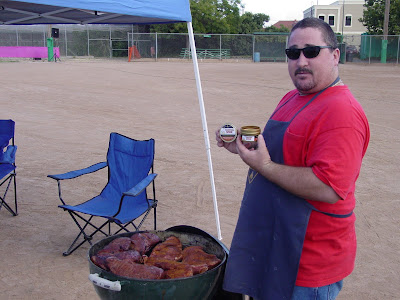 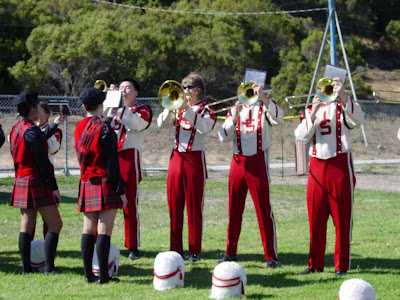 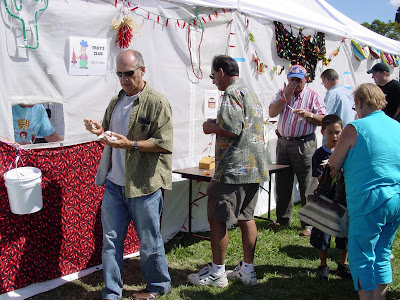 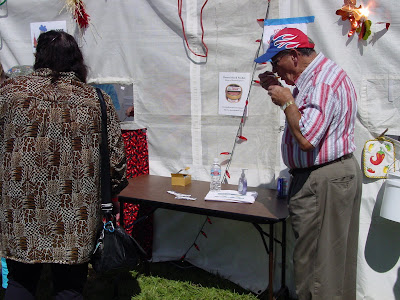 Posted by Chilebrown at 8:50 AM

Good luck, sounds like a great time. I love the midwest, but there are times I wouldn't mind being a little closer to the west coast.

Will you be using the same recipe or do you have a new one to defend your title?

I personally would like to make the recipe hotter. I guess there is no reason to mess with success! The recipe will stay the same.

I'd like to think the pot I loaned you clinched it.

Oh comon, spice it up baby!