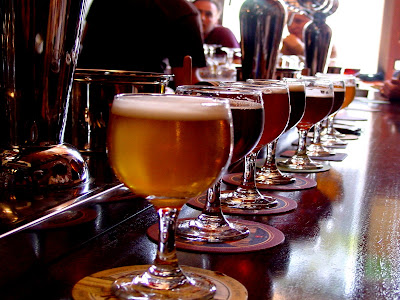 Ms. Goofy and I had a beer date with Dylan (Sourdough Monkey Wrangler) at "The Trappist" Belgian & Specialty Beer Bar. Dylan was on his way to an Oakland A's game. We were on our way to Dinner at 'Mexicali Rose'. We arrived at the bar a little before Dylan. Let me first tell you about my beer knowledge. Way back in the day, I was a beer aficionado. I hung out at one of the original Brew Pubs. This was Buffalo Bills in Hayward. Bill Owen's poured me a few beers. We made trips to Judy Ashworths "Lyons Pub in Sunol. We actually planned vacations around visiting Brew Pubs before we started having Meat Adventures.I brewed for a brief moment. I am no stranger to good beer. I know what I like and I know about different styles of beer. I do not know a lot about Belgian beers. I have tried my share of Trappist Beers. We were looking forward to visiting the Trappist. We have heard a lot of good things about this place. It has only been open for a short while. It is located in Downtown Oakland.

It is a very nice looking place. The actual bar is fairly small. There are a couple of tables in a small back room. There are about a dozen seats at the bar. We arrived shortly after they opened a little after 2 pm. We bellied up to the bar and looked over the beer list. The beer list was massive. There is 15 taps and 140 different bottles of beer. We needed some help. Ms. Goofy, Myself and one other customer were the only people at the bar. We started to quiz the bartender about what we should order. The bartender knew right off that our knowledge of Belgian Beers was lacking. We made no claims that we knew different. We were asking for his help. Well he was not much help. He read the beers on tap that were listed on the chalkboard. He recommended a beer from Lagunitas Brewing. It was a Witbiere. Witbiere is a barley/wheat top fermented beer brewed mainly in Belgium. My eyes lit up. I have always liked Lagunitas products. Bingo! I will have one of those. Ms. Goofy settled on Val Dieu Triple Beer. Fortunately Dylan walked in the door. He asked us what we ordered. He right away corrected the Bartender about my beer. It was not made by Lagunitas but Russian River Brewing. Dylan steered us to ordering a sampler. Well why didn't the bartender suggest that? Dylan knows his Belgian Beers. He rattled off a list of beers that were good. All of a sudden the Bartender became more helpful. He could match Dylan with Belgian Beer knowledge. He did not have time or inclination to help us newbies. We ordered a sample of 4 different Belgian style beers. They were most enjoyable!

That is enough of my Rant. The beer was great. The place is small and way cool. I am glad Dylan was there to help us out. The list of beers is a little overwhelming Our experience could of been a lot more enjoyable if the bartender would have had a little more patience with customers that were not Belgian Beer Experts. We defiantly will return. I still have 150 more beers to try. 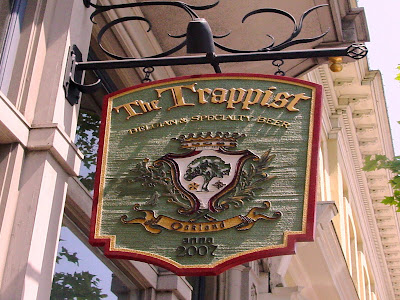 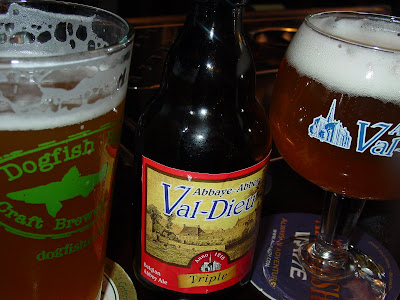 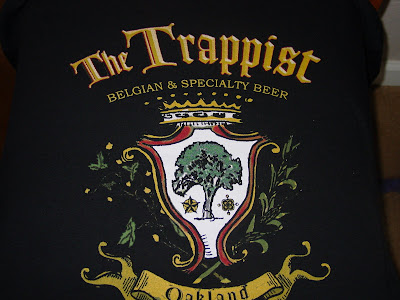 Posted by Chilebrown at 6:15 PM

Finally made it over for a look-see. Yer blog is a great read--- yes, indeed! chefjp

I am glad you stopped by chef jp. We really enjoyed the Roast. Thanks again! I hope to be talking to you again in the near future.

tasty! one of my favorite bbq additions is a belgian dubbel, usually Ommegang Abbey or some such red/brown trappist beer. Mix it in with your bbq sauce. Revel in the deliciousness.