MAYNARD SECRETS OF A BACON CURER 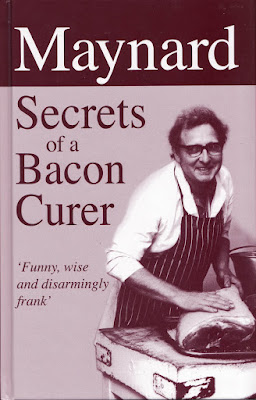 The start of the New Year has dealt me a nasty cold. It is not the swine flu, but, the bacon flu. Whatever you want to call it, it sucks! In between the sniffles and the hacks "Maynard, Secrets of a Bacon Curer" was read. This was a gift from the "President of Cookies". This was an autobiographical collection of short stories and anecdotes from Maynard Davies. Maynard is famous in England for smoking and curing bacon and hams in the traditional way.
Maynard was a dyslexic who had problems with his schooling. At a young age he served an apprenticeship with 'Theodore Mountford', a Master Curer of traditional bacon's and hams. He moved on and opened his own shop in a county setting with his wife. The book talks about various adventures at his shop. He had run ins with the health inspectors, was robbed, conned and still kept his optimistic take on life. He was a perfectionist when it came to curing and smoking products. Maynard gained a national reputation for the numerous styles and different cures of his quality bacon and hams.
This was a wonderful read. Maynard never elaborated on recipes or techniques. It gave a glimpse in the life of a bacon curer. He did give the readers a recipe for Mutton ham which I will not be making. There is also a follow up book called "Manual of a Traditional Bacon Curer" that does have recipes and techniques. I cannot wait to check it out.
ISBN 978-1-873674-93-2
Posted by Chilebrown at 8:16 AM

Sounds like something I'll have to check out. Get well soon!

I love glimpses of people's life stories. Adding this to my library list

This and the other book have been on my wish list for a few weeks. Thanks for the quick review!

Zia, Thanks, I am feeling better and have Meat Adventures planned for next week.

A Year on the Grill, I think you will like this one.

charcutier, You will proably like his third book which has recipes and technique. The only downside is they are for large quantities.